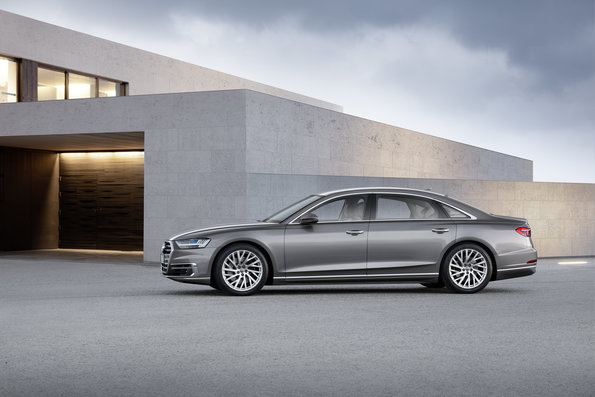 Audi A8 and A8 L as plug-in hybrids

At the International Automobile Equipment 2017 in Frankfurt, Audi presented the new Audi A8. At the market launch, which the fourth generation of the luxury sedan celebrates in November, the customer can choose between two six-cylinder, one diesel and one gasoline engine. In 2018, two V8 units will appear that will be equipped with a 48-volt starter generator for the first time at Audi. The mild hybrid technology (MHEV) should reduce the consumption of the A8 by up to 0,7 liters of fuel per 100 km. The heart of the new system is the 48-volt main electrical system driven by a belt starter generator, which is installed in addition to the 12-volt network and supplies it. The higher voltage of the on-board electrical system allows the Audi to coast up to 55 kilometers silently at speeds between 160 and 60 km / h - emission-free with the engine switched off. The power of up to 12 kW recovered during braking can help accelerate and thus contribute significantly to reducing fuel consumption. 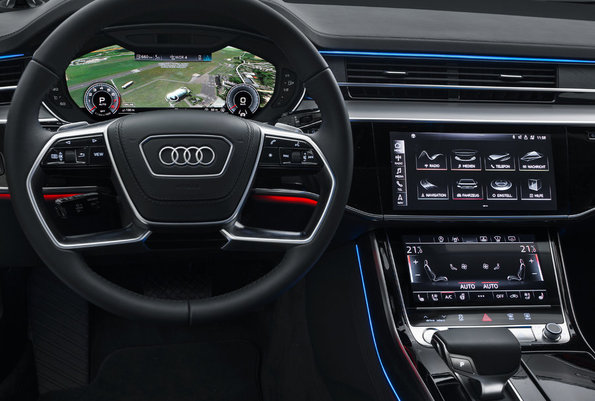 The new Audi A8 - Copyright Audi

After the mild hybrid, a plug-in hybrid version of the A8 L will also be submitted; but only in autumn 2018. The third plug-in hybrid model with the name A8 L e-tron will be released with a system output of 449 PS (330 kW) and an electric range of 50 km. The 14,1 kWh lithium-ion battery is charged either wirelessly using Audi Wireless Charging, an inductive charging technology in which the vehicle only needs to be driven over a floor plate to charge, or by cable.
The plug-in hybrid will have a 3.0 TFSI and an electric motor, which in addition to the 449 PS (330 kW) system output have a torque of 700 Nm. The sprint from 0 to 100 km / h is done in 4,9 seconds and the electronically restricted top speed is reached at 250 km / h. The A8 L is the long version of the A8 and, with 13 centimeters more, should offer luxurious space, especially in the rear of the vehicle. 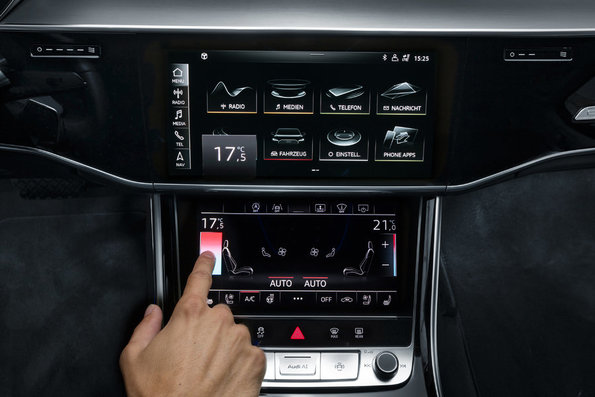 The new Audi A8 - Copyright Audi

All models of the A8 and A8 L are equipped with all-wheel drive. In addition, the Audi A8 is the world's first production vehicle that masters level 3 in autonomous driving. This means: With the so-called AI traffic jam pilot, the Audi takes over all of the driving. Of course, the driver has to stay behind the wheel; but he can take his hands off the steering wheel and his feet off the pedals and doesn't have to worry about driving. If the traffic jam has decreased so far that a speed of more than 60 km / h can be driven, the car reports to the driver that he must take over driving again. Unfortunately, this function is not yet allowed on the streets; but at least the A8 would be prepared for this case.

The design of the A8 is interesting: the radiator grille called Singleframe has become wider, making the front appear wider and flatter overall; The wheel arches are also designed to be much more muscular. The interior looks tidy: Instead of switches, the large touchscreen displays characterize the design and the space available in the Audi A8 is enormous - of course, a little more in the A8 L. The new A8 is available from October 2017 for prices from 90.600 euros (A8 L from 94.100 euros Euros) on the market.

For more information on the A8 from the manufacturer, click here.