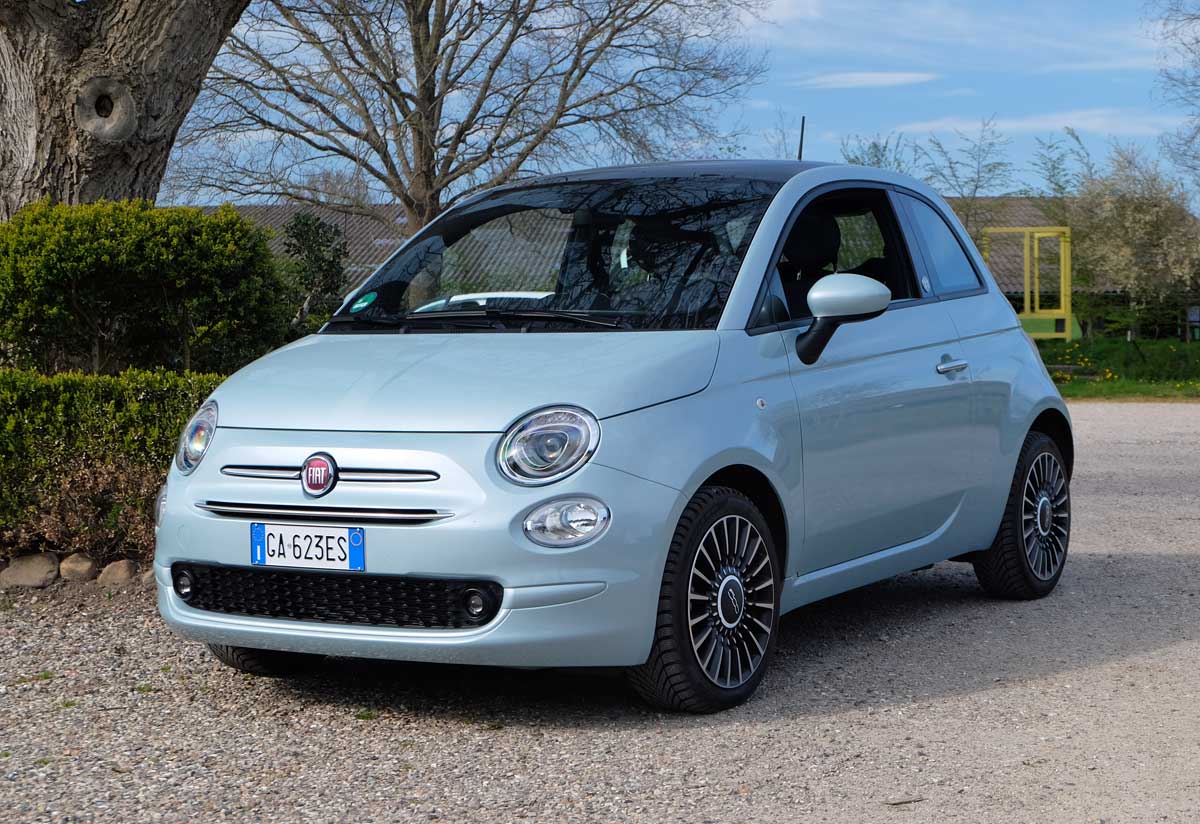 For the Fiat 500 Hybrid, Fiat relies on a completely new three-cylinder gasoline engine with a belt starter generator that works in the 12 volt electrical system and is combined with a compact lithium-ion battery. 51 kW (70 hp) are made available from one liter of displacement. The engine runs much smoother than the high-speed 2-cylinder models and meets the Euro 6d emission class. The automatic start-stop system is less vibration than the four-cylinder gasoline engine.

The “Launch Edition” special model from Fiat 500 Hybrid can be recognized by the “Hybrid” lettering on the rear and a special logo on the center console. The letter H is formed here by two drops of dew, symbolizing the beginning of a new era. Both models are painted in the exclusive “Dew Green” body color.

According to Fiat, the seat covers are made entirely from recycled plastic. The yarn consists of SEAQUAL®, certified by the Spanish nature conservation organization of the same name. The seat covers of Fiat's new hybrid models contain 10 percent plastic collected from the ocean and 90 percent recycled material from sources on land. The plastic waste collected from nature - mostly PET - is first shredded into flakes for processing as yarn. In the weaving process, the different components are mixed, then dyed and finished using environmentally friendly methods.

The mild hybrid technology is based on a new three-cylinder gasoline engine with a naturally aspirated engine and a displacement of one liter under the bonnet, which develops 51 kW (70 hp) at 6.000 rpm and a maximum torque of 92 Newton meters at 3.500 rpm. The two valves per cylinder are operated by a single camshaft that is chain driven and allows variable timing. The compact combustion chamber, the intake tract which creates a strong turbulence, the comparatively high compression of 12: 1 and the exhaust gas recirculation (EGR) ensure a high level of efficiency. The engine block developed together with Teksid is made of die-cast aluminum, the cylinder liners are made of cast iron. The weight of the entire engine is only 77 kilograms. The internal friction is reduced by the ten millimeter offset crank drive and a ratio of bore to stroke of 1,24, which also increases the efficiency of the engine.

The belt starter generator (RSG) is connected to the engine via the belt, which also drives the other ancillary units. The system recuperates when braking and when coasting. The electrical energy obtained is stored in a lithium-ion battery with a capacity of 11 Ah. In return, the belt starter generator supports the engine, for example when starting up, with an output of up to 3,6 kW and takes over the function of the starter motor in the automatic start & stop system.

During the test drives, we tested what is known as sailing. The engine switches off here at a speed of less than 30 km / h and restarts immediately and automatically if necessary. To do this, the driver is prompted by a corresponding symbol in the status display of the hybrid system in the instrument panel to put the vehicle into neutral. During this so-called sailing, the lithium-ion battery takes over the supply of all electrical consumers on board.

There are detailed tests and trends in the current magazine. Subscription under