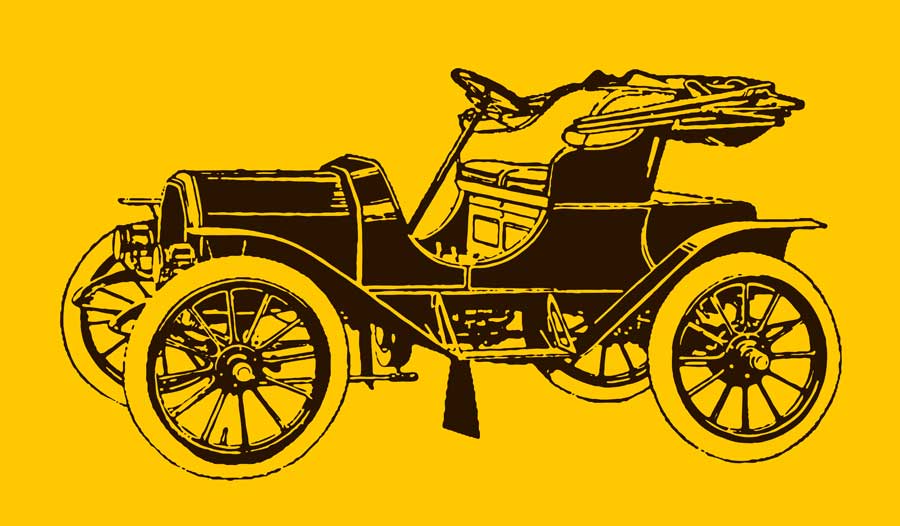 The history of the electric motor as an automobile drive

The history of the electric motor does not begin in the technologically advanced modern age: the first electric vehicle was presented to the public as early as 1881. Gustave Trouvé equipped his “Trouvé Tricycle” - a three-wheeled, electrically powered vehicle - with 2 electric motors, which obtained their energy from 6 lead-acid batteries. The vehicle reached a top speed of 12 km / h.

In 1888, the German manufacturer Andreas Flocken developed the world's first (well-known) four-wheeled electric car. The flake electric car was a high-wheeled carriage, a so-called light Bavarian "chaise" (in the past, all automobiles were called "steam chaises", regardless of the type of drive). The electric motor built in by Flocken transmitted its power to the rear wheels through elastic leather straps: this way, bumps in the road could be dampened.

The battery for the electric vehicle probably came from the factory "Accumulatoren-Fabrik Tudorschen Systems Büsche & Müller OHG" - which later became the company VARTA emerged -, the only German company that could produce lead-acid batteries for vehicles. Lead-acid batteries based on Henry Tudor's principle already achieved an energy density of 1886 Wh/kg around 27 and, with a weight of around 100 kg, were ideal for installation in the Flake electric vehicle. Unfortunately, little is known about the other vehicle details, since the original from 1888 is also considered lost.

The beginnings in the history of electromobility

The automotive expert Franz Haag lovingly reconstructed the flake electric car, which is considered an important milestone in electric mobility. The first electric cars also developed in the USA: In 1890, William Morrison built the first successfully electrically powered car. The vehicle, reminiscent of a carriage, is powered by a 2,5 HP electric motor, which was powered by 12 batteries integrated under the seats at a maximum cruising speed of 8 km / h. The following years developed into a true heyday of electric mobility: In the years 1896–1912 there were around 34.000 registered electric vehicles in the USA (1900: 1.575). The ranges of the developed electric vehicles reached almost today's values ​​- some electric cars of that time could drive up to 100 kilometers.

The development of the electric motor as a drive in the automotive industry continued to develop: in 1899 the first electric vehicle broke the speed record of 100 km / h - “La Jamais Contente” (in English “the never satisfied one”) was a cigar-shaped vehicle from the Belgian racing driver and entrepreneur Camille Jenatzy.
The young Ferdinand Porsche also presented a novelty among the electric vehicles in the course of the World Exhibition in Paris in 1900: the Lohner-Porsche electric vehicle was driven by electric motors that were integrated into the wheel hubs of the front wheels. The so-called wheel hub motors of the electric vehicle could produce 20 hp each for up to 7 minutes; the 44-cell battery with 300 ampere hours gave the vehicle a range of 50 kilometers. Shortly afterwards, Porsche also developed the world's first hybrid vehicle by combining the wheel hub motors with an internal combustion engine.

Electric motor in the USA

In the USA in particular, electric vehicles developed rapidly; By 1900 there were already around 40 percent purely electrically powered vehicles, the rest were either steam or gasoline powered. When the electric starter for gasoline engines was invented in 1910 - before the engines were cranked by hand - the electric motor faded into the background: internal combustion engines have greater ranges and the supply of cheap oil also increased significantly. The previously so successful electric vehicles largely disappeared from the scene - they became niche products until 1990.

The oil crisis in the 1990s and the associated growing environmental awareness brought electric vehicles back into the consciousness of the population and companies.
In 2015, around 1.3 million electric cars were registered worldwide.