The use of natural gas as a fuel is not as innovative as some might think. Natural gas has been used as a fuel for 150 years, as the Frenchman Jean-Joseph Étienne Lenoir developed the first gas engine and installed it in a vehicle as early as 1860.
Since then, of course, a lot has happened - the vehicles have admittedly become more modern, but the basic technology of this type of drive has remained the same. The first German cars with natural gas drive went into series production in the mid-XNUMXs - BMW began building bivalent models, followed a few years later by other well-known manufacturers such as Opel, VW and Ford.
The advantage of this low-emission drive is indisputable: natural gas engines emit considerably fewer pollutants than conventional combustion engines, they produce around 18 percent less CO2 than gasoline and, compared to diesel, even 50 to 95 percent less nitrogen oxides. In addition, no soot particles are released from natural gas vehicles.
The technology of natural gas engines hardly differs from conventional Otto engines: Instead of a gasoline-air mixture, a natural gas-air mixture is compressed, ignited and burned in the cylinders. The engines can also run on gasoline, but there are many advantages that can be achieved with the use of natural gas. The natural gas-air mixture can be compressed more, which leads to lower consumption as well as better driving performance and significantly lower pollutant emissions. In addition, natural gas engines are considerably quieter than conventional engines, as the natural gas mixture burns much more gently. The tanks for the natural gas are installed below the floor so that the full trunk volume is available. In the event of an accident, the tanks are even more robust than normal petrol tanks. Since they are protected by a metal cage and have safety valves, the risk of explosion in the event of an impact is virtually non-existent.
Since natural gas engines can burn both natural gas and gasoline, there are two possible types of drive. Bivalent vehicles have a natural gas and a petrol tank and can thus bridge any gaps in supply by switching from natural gas to petrol operation with a button.
Monovalent vehicles, on the other hand, only have one fuel. The engines are also optimized for natural gas drive and achieve better efficiencies and lower consumption. So far, mostly bivalent vehicles have been found on the market, whereby monovalent vehicles are now on the rise due to the increasing number of natural gas filling stations. 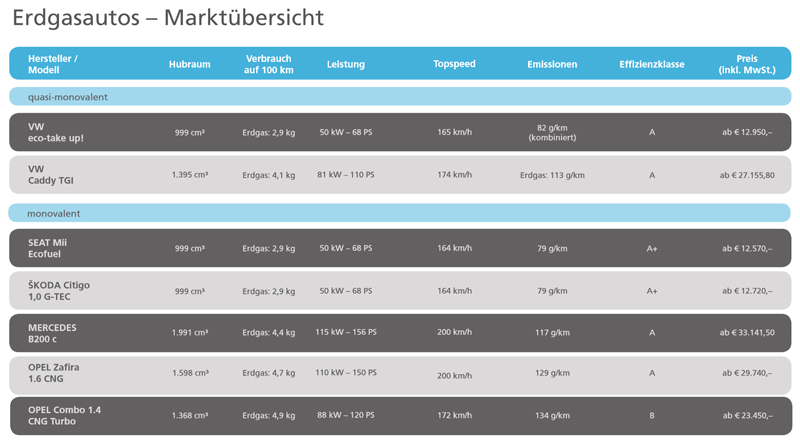 So far, natural gas is the only alternative fuel that is widely available and has a positive environmental balance. As a fossil raw material, natural gas is still there
available for at least 70 years, with new natural gas deposits being discovered all the time. If all known deposits are used, a supply of another 70 years should be ensured. Bio natural gas can also be added to fossil natural gas. It is obtained from natural waste and produced in biogas plants, so it is permanently available. Cars powered by bio-natural gas save up to 97 percent of CO2, so they even represent an improvement in the environmental balance of the alternative fuel. Around 30 percent of German natural gas filling stations have so far offered bio-natural gas - and the trend is rising.
Natural gas in liquid form is also trend-setting. LNG (Liquefied Natural Gas) is natural gas which becomes liquid at a temperature of -163 ° C. Since liquid natural gas has a higher density, much greater ranges are possible. This alternative is particularly interesting for heavy transports or long-distance transport.
With 900 filling stations, the Federal Republic of Germany has the densest network of filling stations in the natural gas sector. In January 2013, around 95.500 natural gas vehicles were already on the roads in this country. Natural gas scores not only in terms of the environment, but also in terms of the cost factor: Compared to gasoline, around 40 percent of fuel costs can be saved. The vehicle tax for natural gas cars is also significantly lower, since the CO2 emissions are also taken into account here. 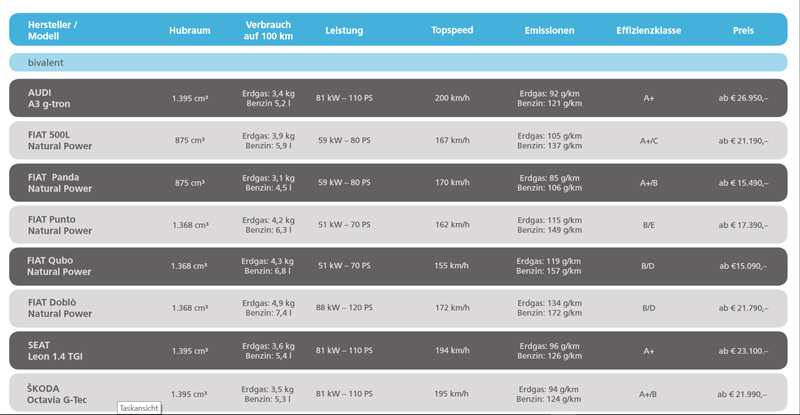