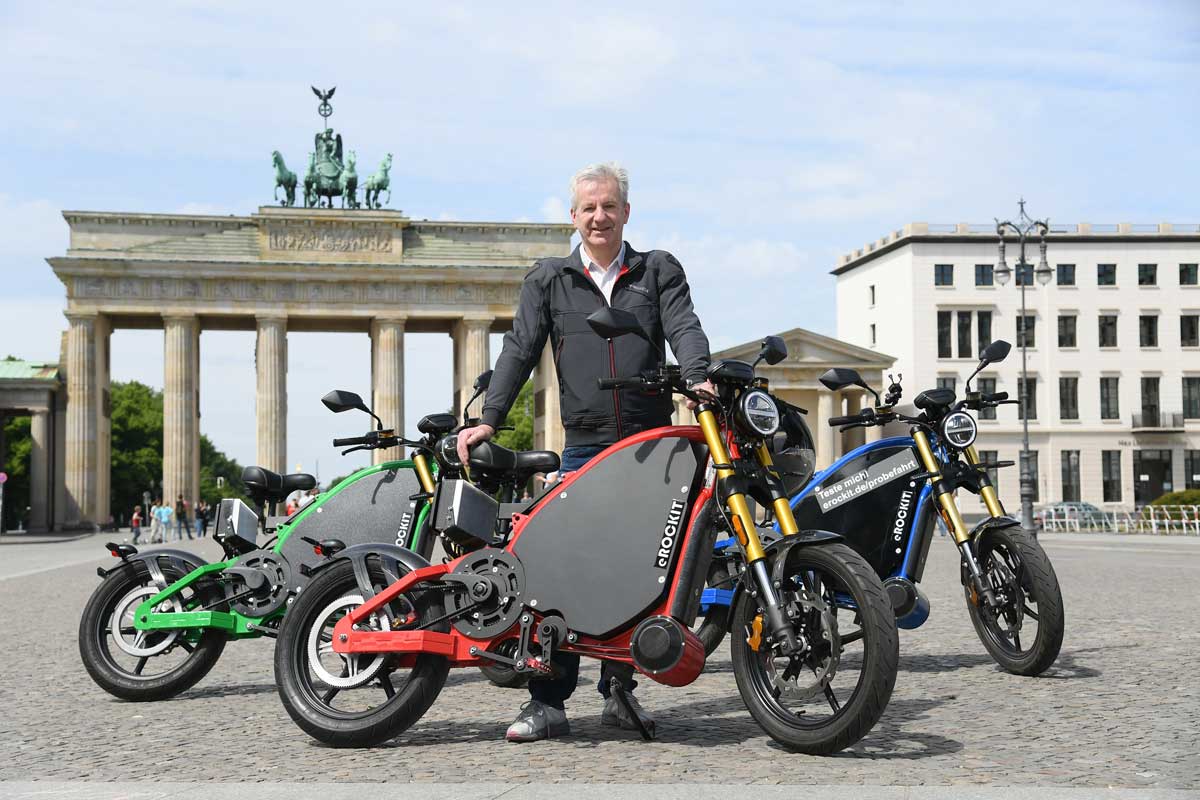 So far, the S-Pedelecs with speeds of up to 45 km / h have been the pacemakers among the Pedelecs. Now the start-up company eROCKIT Systems GmbH from Hennigsdorf near Berlin is taking off with a pedal-powered electric motorcycle. The combination of pedelec and e-motorcycle has a significantly higher performance and, according to its own credo, stands for innovative disruption in the market. In an interview with Andreas Zurwehme, CEO / Managing Partner of eROCKIT Systems GmbH, we take a look at the unique selling points and the market potential of eROCKIT.

gcm: In the last year sales for pedelecs increased to 1,36 million bikes with electric drive in 2019. In terms of speed and technical innovations, the eRockit positions itself well above the pedelec. Where do you see the main market potential?

It is true that the eROCKIT uses pedals, which is why many cyclists are enthusiastic about our bike. And it is true that the eROCKIT has the performance of a motorcycle, which is why it appeals to many motorcyclists. The eROCKIT runs under the tenor "innovative disruption", characterized by the fact that as a (still) small company we are making a significant change, namely the relocation of the conventional drive interface, here the throttle grip, to the pedals. This change does not position the eROCKIT alongside or against other technologies, but opens up a new market segment, that of pedal-powered e-motorcycles. In addition, the eROCKIT is a digger, that is to say, it takes additional market shares from users who are no longer satisfied with the old technology or who are striving for change. These customers, initially called early adopters, are the opinion leaders for the eROCKIT. In a second and third wave, however, I see the eROCKIT in different model variants as a product for the general public who want to move around in a modern, fast, emission-free and healthy way.

The unique selling points of the eROCKIT

gcm: In view of the price of a small car, buyers are wondering which unique selling points speak for the eRockit?

It is more of a bad habit in Germany to compare apples with pears. What does a small car as a price reference have to do with an electric motorcycle? The eROCKIT solves a problem that no car can solve, namely to get from A to B efficiently in today's massive traffic density, by the way in large cities around the world. With the eROCKIT I remove the established hierarchies in road traffic. It is not the 5 meter long and 2 meter wide car that makes the race, but a flexible, agile, fast two-wheeler adapted to today's traffic density sets the pace. The unique selling propositions - plural is appropriate here - are that the eROCKIT
1.) is an electric motorcycle with indescribable driving pleasure and an appealing range
2.) is the only motor vehicle on which one has to move, even on which one can do sports
3.) is an energy storage device of 6,6 KW / h, so it can also deliver its energy to other consumers when it is not being driven itself

Reduced to the price, you have to use e motorcycles and large e-scooters, just a few examples:
Harley Davidson Live Wire approx. 35.000 euros
Energica 23.000 euros and up
BMW Evolution 15.000 euros upwards

The eROCKIT is one of the most affordable electric motorcycles “Made in Germany”. In addition, there are our leasing and financing offers, which enable eROCKIT driving from 99 € / month (with down payment) or 190 € (without down payment).

gcm: Let's take another look at the technology. What are the main distinguishing features from competitors such as electric scooters or electric motorcycles?

The difference lies in the intuitive, clutch-free direct drive via the pedals. The person becomes one with the vehicle through the constant stepping movement, is at the center of mobility on his eROCKIT and receives an unprecedented driving experience thanks to the performance values ​​of the vehicle. The operation is very easy, because we have all been able to ride a bike since we were young. For us it is a natural, natural movement. Coupled with the rapid acceleration, a top speed of approx. 90 km / h and a full range of 120 km, the eROCKIT not only provides a unique driving experience but is also practical for everyone who wants to get from one place to another quickly and environmentally friendly, like e.g. commuters. But judge for yourself. I am happy to invite you to take a test drive. And again: eROCKIT opens a new vehicle category just like Red Bull opened the "Energy Drinks" category. We are still talking about market participants, competitors will only emerge later.

Interview on the market launch of eROCKIT in summer 2020