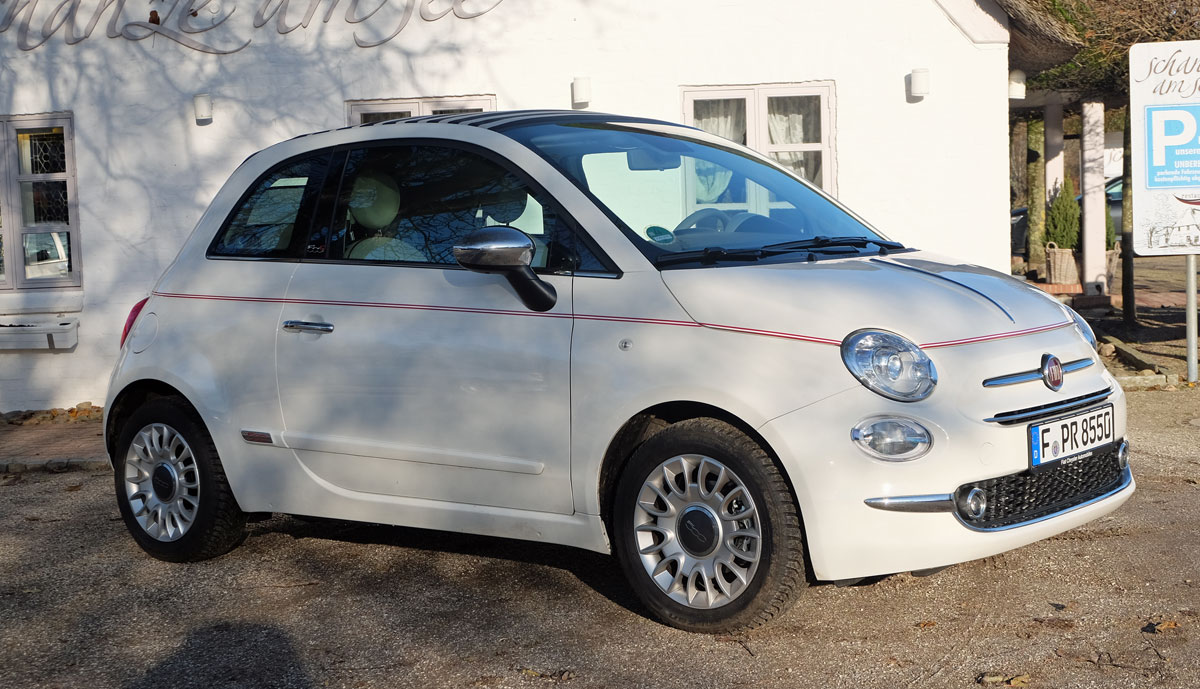 The year 2020 will usher in a whole new era. The small and compact Fiat 500 will open up to a whole new audience as a retro Stromer in the second half of the year. The 500 has enjoyed a growing fan base over the past few years and, according to initial estimates, up to 80.000 units of the current version should be produced in the beginning of the year. We are testing the current summer model Fiat 500C Dolcevita until the start of the emission-free future. The special model for the 60th anniversary is available for the 500 and 500C.

Winter blues over northern Germany. In contrast, the Fiat 500 turns out to be a successful eye-catcher in the gelato white paintwork, flattered by a red-white-red banderole around the body. The 500C is upgraded by the chrome lettering Dolcevita on the trunk lid, optical chrome elements on the bonnet and the cover caps on the exterior mirrors. In the finish, it is delivered with decorative 16-inch alloy wheels.

The compact 3,57m short city runabout still bears many of the insignia of its predecessors, which have been built since 1957, such as the very short overhangs at the front and rear, the round, slightly angled headlights or the knobbly shape. In addition, there are some eye-catchers in the special DolceVita model as 500C in the form of a distinctive 500C lettering on the sides, a striped convertible top or the casually placed fog lights.

Greetings from the time of the economic miracle

A little out of date, the Fiat 500 in particular has found a large number of enthusiasts in recent years. With more than 35.000 new registrations alone, the 500 series reflects the current zeitgeist, a compact and economical microcar that visually protrudes from the street scene. The “sweet life” from the 1960s, paired with the charm and glamor of automotive style awareness, can be found in the 500C Dolcevita.

Our test car is the Fiat 500C with a 0,9l two-cylinder engine in the E6D-TEMP version. The DolceVita version is one of the special equipment lines for the 2020 model year. There are currently 3 engine versions for this. What remains are the 69-hp entry-level petrol engine with four cylinders, its liquefied petroleum gas version (LPG) and the 85-hp version of the two-cylinder (Twinair). The DolceVita equipment includes the large Uconnect 7-inch display, a Bluetooth radio with USB connection, electric windows, cruise control, air conditioning and a start-stop system. In the 500C version it is covered by a cross-striped convertible top.

You are spoiled for choice when it comes to the right engine. The requirements in the city, in the country and on the motorway are very different. The quietest-running engine is clearly the four-cylinder with 69 hp. It can be driven lazily in city traffic or moved with a 5-speed automatic. At higher speeds with a manageable 102 Newton meters of torque, not much happens on the autobahn, because the maximum torque only develops at 3.000 rpm. The overtaking maneuvers should also be carefully planned, with the 12,9 taking 100 seconds from zero to 500 km / h at a leisurely pace.
In terms of dynamics and torque, the small two-cylinder is ahead. With 145 Newton meters at 1.900 rpm, the decisive small advantage is clearly audible here. Because the Fiat 500 is most often at home in urban areas, most customers have so far opted for the quieter four-cylinder. As a shopping mobile with a small parking area, for short-distance speedsters to visit friends and commuters to the nearby workplace, the compact racing roll finds its optimal destination.

With the compact two-cylinder with turbocharging, the car, which weighs 1.075 kg, is sufficiently motorized for its original use in an urban environment. With the 5-speed gearbox, hard shifting is the order of the day, acceleration from zero to 100 km / h is accomplished in 11 seconds and the top speed is 173 km / h. The standard consumption is stated as 4,8 l Super. In our tests in winter, we were between 4 and 6 liters at 0 to 10 degrees daytime temperatures.

Due to the short wheelbase and the somewhat harder suspension, slight compromises have to be made in the suspension system on uneven track profiles. The steering responds very directly and is smooth. The space is sufficient for the very compact microcar. There is 185 liters of storage space in the small trunk, which is definitely enough for daily shopping. If you fold down the foldable rear seat, up to 550 liters of storage space can be used, which means that some small pieces of furniture can be stowed away.

The Fiat 500 family has its own charm as a city car. The three main variants are the compact Fiat 500, the “L” version as a minivan for young families and the “X” as a crossover SUV with its own cult character. Because of this broad distribution, Fiat 500s have a steady fan base. In addition to the conventional engines mentioned above, mild hybrids and a purely electric version are planned for the second half of 2020.

There are detailed tests and trends in the current magazine. Subscription under