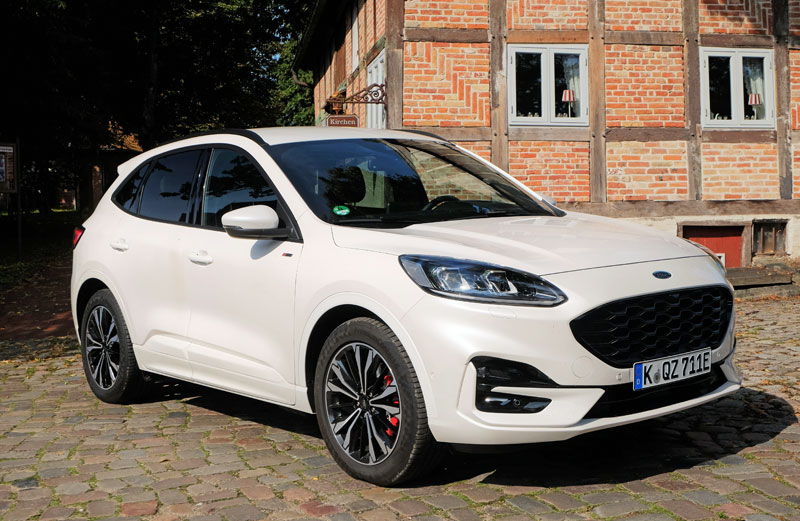 Ford Kuga PHEV ST-Line in a practical test in 2021

The current third generation of the Kuga was presented in April 2019. It is identical to the Escape offered in North America and, like the fourth generation of the Focus, is based on the current C2 platform. According to data collected by JATO Dynamics, the Kuga variant is the best-selling plug-in hybrid car in Europe in the first half of 2021. In Germany, too, there was high demand following the initial difficulties of the PHEV variant in the previous year. The ongoing SUV trend, the tax advantages and the environmental bonus have had a positive impact on demand. In the test it surprises with some special abilities.

The plug-in hybrid drive in the Ford Kuga had a false start in 2020. Last year, Ford had to stop deliveries after a fire in the area around the battery on some models. The technical problems have now been resolved and obviously did not damage demand. First of all, let's take a look at the technology. The Kuga's plug-in hybrid system is based on a 2,5-liter four-cylinder petrol engine that works according to the Atkinson cycle, an electric motor and a lithium-ion high-voltage battery with a capacity of 14,4 kilowatt hours (kWh).

Together, this drive system develops an output of 165 kW (225 hp), which takes over the drive via a continuously variable CVT automatic transmission. The petrol engine produces 112 kW (152 PS) and the electric drive 97 kW (131 PS). The Kuga PHEV is on the BAFA list of eligible electric vehicles and thus qualifies for the environmental bonus. The battery of the plug-in hybrid vehicles can be charged both by the combustion engine and externally at a public charging station or at the home socket - this means that journeys in purely electric mode are also possible. So it is hardly surprising that some used vehicles are still accepted as part of payment with the charging cables in their original packaging. But that's not surprising, because the maximum charging power is specified as 3,7 kW. Ford will have to make some improvements here, then the 11/22 kW charging stations at the shopping centers can be recharged more efficiently.

The Ford Kuga ST-Line that we tested focuses on sporty accents. This includes a sporty chassis and some equipment features. Traditional values ​​from the previous versions have been partially adopted. Basic functions such as operating the air conditioning and volume control are implemented as rotary controls. The multifunction steering wheel is clearly laid out and reduced to the essential operating elements. A well-balanced Bang & Olufsen sound system ensures pleasant sound reinforcement while driving.

The exterior of the third generation of the Kuga has once again taken on significantly more contours. It emphasizes its SUV advantages with a longer wheelbase and 4,61 m external length. The lower front merges into a flatter windshield and a lower roof line. The front is emphasized by a large-format honeycomb grille and elongated headlights. At the rear, the width is emphasized by the transverse lines. The wide-opening trunk lid also emphasizes the new generosity. With the ST-Line, the light metal rims and the more elaborate bumpers set discreet visual focal points.

An 8-inch touchscreen with a screen diagonal of 20,3 centimeters is integrated as central infotainment on the center console and works with a clear menu. Important elements such as GPS, telephone and radio are clearly arranged. The most important commands can also be entered using voice control. The touch surface can be used intuitively after a short period of familiarization. The main fittings in the form of a 12,3-inch display are enthroned behind the steering wheel. The display resolution and presentation are not as appealing as those of the competition from Audi or BMW, but the individual configuration options make up for it. Unfortunately, there is only a spartan head-up display that is projected onto an extendable plastic panel. The projection directly onto the windscreen is clearly more advantageous. The driver's seat offers good comfort with many electrical adjustment options.

The entire drive system has a few special features. The naturally aspirated engine according to the action principle closes the inlet valve only after bottom dead center. This increases the efficiency slightly, but the power and torque are designed to be lower. The performance is therefore designed more for the leisurely cruiser. The transition from pure electric operation to hybrid mode takes place abruptly. With the single-stage automatic transmission, higher engine noises are inevitable when you step on the accelerator pedal. After the moderate acceleration from zero to 9,5 km / h in a good 100 seconds, the combustion engine remains involved in the long term until the automatic control takes over the switchover to the electric motor after a long distance in hybrid mode. When braking, the system of recuperation and brake calipers noticeably readjusts.

The PHEV version is an SUV designed for comfort and low fuel consumption. The consumption levels off between 5 and 7 liters in the summer test, making it appear particularly interesting for long journeys. With a defensive driving style, distances of more than 800 kilometers can be mastered with one tank of fuel. It is currently the only alternative to the diesel and petrol variants that are still offered.

Anyone who is often out and about in city traffic with the Kuga will appreciate the smoothness in electric mode. Ideally, up to 50 kilometers can be achieved purely electrically. In terms of real good ranges, it can compete with diesels. In terms of price-performance ratio, it is an interesting and well-equipped PHEV SUV with the environmental bonus and tax advantages.