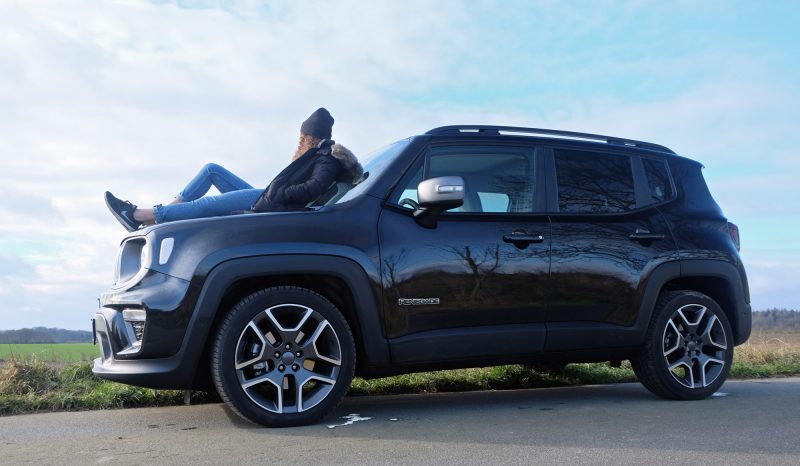 Jeep has been involved with the Renegade in the increasingly popular SUV class since 2014. The concept is a mixture of the ingredients of the traditional SUV paired with an off-road capability from the traditional Jeep Wrangler. The dimensions are suitable for both urban and off-road use. For the new year, Jeep has given the Renegade a significant update and promises a plug-in hybrid for the coming year. While Jeep started with large-volume 3- or 4-liter units in the past, the focus in the future will be on downsizing in the engine segment and, in the near future, probably on electrification.

The downsizing of the internal combustion engines as part of the Dieselgate combined with some new models brought the Jeep brand a new registration record last year. With 17.120 new registrations and a growth of 28,9 percent, it was the strongest year in terms of sales since the market launch in Germany in 1984. In addition to the new Compass, the Renegade entry-level model is the brand's most popular SUV with 4.936 new registrations.

Downsizing and the slow departure from the diesel engine

If the balancing act between severely tightened registration regulations and threatened diesel driving bans is to succeed, the only thing left for the manufacturers of large-format SUVs to do is to flee forwards. The focus is on three drive scenarios: the downsizing of combustion engines with less environmental impact, the system change to electrification or the hydrogen drive. The first two variants are currently being pushed for the new Jeep Renegade.

Many segments are reminiscent of the tried and tested Wrangler, the traditional seven-slot grill is standard on the front. Behind it, the new petrol engines with compact displacements make their debut. The smallest three-cylinder, as a 1-liter engine, has an output of 120 hp and is a bit underdimensioned for the mighty off-road vehicle. While it is still swimming in the city, it is not suitable for the 1,4-ton vehicle in rapid overtaking maneuvers or in tough off-road use.

In this case, it would be better to use the 1,3-liter four-cylinder engine, which is optionally available with 150 hp or as a 180 hp variant. In view of the discussion about the driving bans, the focus was probably also on Jeep to offer the new engines with particle filters in accordance with the latest emissions standard. You won't have to worry about driving bans, but by 2021 at the latest, according to company boss Sergio Marcchione, diesel should only be found in commercial vehicles.

Those who rely on robust off-road use have to rely on the more powerful engine variants for all-wheel drive. In normal road operation, the vehicle is driven via the front axle. The all-wheel drive switches on depending on the ground conditions. If you still want to put a real focus on the terrain, it is best to use the off-road version Trailhawk, here there is more ground clearance (up to 210 mm), as well as terrain programs with hill descent assistance and crawler gear.

The renegade on new paths

The true off-road fans, who also appreciate the rough terrain in addition to the road, need not worry, the Renegade has not given its core competencies to the road. With sufficient ground clearance, good slope and ramp angles and up to 19-inch wheels, it can easily cope with secondary routes in all weather and ground conditions.

If you also appreciate the climbing ability and the rugged off-road capabilities of a Renegade, you can take advantage of the full power distribution with the "Trailhawk" version with 21 centimeters of ground clearance, special all-wheel drive and a reduction of 20: 1.

The “Jeep Active Drive” all-wheel drive system controls the drive between the front-wheel and all-wheel systems fully automatically. When the road conditions are good, the drive only works via the front axle and saves fuel accordingly. The response behavior is optimized in understeer or oversteer situations. This is particularly noticeable when cornering quickly.

Ultimately, the Renegade with its very robust structure is designed for off-road use or as a draft horse for braked trailer loads of up to 1.500 kg. The spacious interior can also be used accordingly: Regardless of whether up to 5 adults or the entire loading area is to be used, there is enough seating or storage space available for these cases. With the bench seat folded down, the loading volume can be expanded from 350 to 1.300 liters.

As part of the renovations, the safety equipment was expanded. Lane assistant and the recognition of obstacles as well as the traffic sign recognition belong to the standard equipment. From the "Limited" version, an emergency brake assistant is also included.

As described above, the Renegade offers sufficient space and many practical storage compartments for utensils of different sizes. The cockpit is designed with dark, non-reflective plastics. The multifunction steering wheel is equipped with numerous setting buttons, on the left mainly for the configuration of the central digital cockpit and on the right for the adaptive cruise control in long-distance driving. In the middle there is a relatively large multimedia touch display for the main functions of multimedia, radio, telephone, air conditioning, settings and navigation services. After a short period of familiarization, it is operated intuitively and with a good response time on the display.

The days of compass and maps are a thing of the past, the necessary information is now available in real time via the "Uconnect Live App", which is downloaded to the smartphone via the App Store or Google Play. Regardless of whether it is web radio, Reuters news service or, for example, the Deezer Internet music platform, all informative services are available, as are maintenance topics or the timer for customer service.

Off to everyday life

As an entry-level model, the Renegade does without all the comfort of a Compass or Cherokee. It is still a purist in the best sense of the word and the long transverse grooves and bumps at high speeds can be heard clearly on the motorways. But you can also relax on the long-distance tests on the A20 or A7, the adaptive cruise control works very sensitively and makes gliding on the highway a relaxed driving experience.

The idiosyncratic concept predestines the Renegade more for the special tasks, the brand core Offroad can be used relaxed on the muddy dirt roads up to the shallow sandy slopes. For recreational athletes, there is enough storage space for sports equipment. For equestrian sports, it can handle up to 1.500 kg of braked trailer loads. These versatile uses make it a generalist for almost all purposes.

The entry-level model Renegade offers a universally applicable SUV combined with rustic off-road properties at a reasonable price-performance ratio. In addition to the new engines with the Euro 6d TEMP standard, a version with a plug-in hybrid from Jeep will also be offered in the coming year.

Jeep is planning Renegade as a plug-in hybrid from 2020

The manufacturer Jeep, which so far has only worked with traditional drives, plans to expand its range to include a plug-in hybrid electric vehicle (PHEV) in the future. According to information from FCA, the FCA Melfi plant in Italy is being prepared for production. The new Jeep Renegade PHEV will be produced in combination with the combustion engine versions and the Fiat 500X at the Melfi vehicle assembly plant.

According to press releases, the first pre-series vehicles are planned for 2019.
The investments should amount to more than 200 million euros for the introduction of the new drive. The program should also include an intensive training program to train all employees in the implementation of this new technology. The production facilities also have to be modernized.
"With over 742.000 Renegades produced in Italy, the Melfi plant and the Renegade are the ideal location and product for the launch of the PHEV to strengthen the offering of this very successful Jeep," reads the official statement from Pietro Gorlier, Chief Operating Officer EMEA Region .

As part of the presentation of the business plan for 2018 to 2022 during the Capital Markets Day on June 01, 2018, future electrification was defined as one of the main factors in the strategic plan. The goals for electrification have also already been set. The adaptation to the new regulatory requirements in the individual sales regions is to be implemented.

According to the FCA, the first steps towards electrification were taken with the launch of the PHEV Pacifica minivan at the beginning of the year and the introduction of mild hybrid e-torque technology on the Ram 1500 pickup. According to the company, the plan provides for a total of twelve electric drive systems (BEV, PHEV, full hybrid and mild hybrid) to be offered in global architectures by 2022. Thirty different models are to be equipped with one or more of these systems.

There are more trends and innovations in the current issue. Subscription under