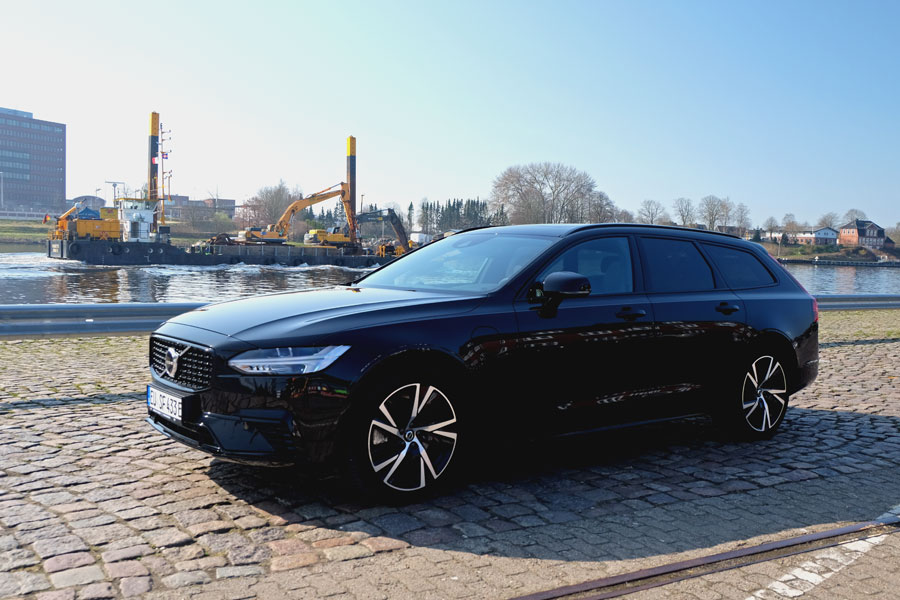 Volvo has been increasingly using hybrid models since 2017, and the new Volvo V90 is now available on the market in two plug-in hybrid versions. With the model names T6 and T8 Twin Engine, Volvo is presenting two fully equipped and large-format station wagons in the premium segment in the R design. In terms of performance and price, it is clearly at the top of the range. The powerful engine was adopted from the top models of the 90 series. In this test, we value semi-autonomous driving over long distances.

In long-haul traffic, the large business station wagons are more in demand and more often in use. Here you can choose between four driving modes, depending on driving behavior and external conditions: from pure ECO mode, hybrid mode and sport mode to all-wheel drive. According to the Volvo press release, the Volvo V2, which weighs more than 90 tons, has the following consumption values: According to the WLTP and EU regulation 2,4 l Super. This can then only be determined under the laboratory conditions of the WLTP test standard with a fully charged battery. The reality in our long-distance test over 2.000 km estimated the consumption according to the on-board display to be 6 to 7 liters on average with an outside temperature level between 15 and 25 ° C.

Semi-autonomous driving in the long-distance test

A lower consumption could probably be achieved with charged batteries. However, this takes at least 3 hours at 16 A for each complete charging process. At high cruising speeds between 130 and 160 km / h, the V90 then approves of the driving modes listed above between 8 and 10 liters of premium gasoline. If you take a look at the high curb weight of around 2.093 kg, this consumption is not surprising. And on the long journeys, the additional weight of the electric motor and the battery is noticeable accordingly. As with other cars, the consumption values ​​under laboratory conditions, according to which the approval for the V60 was made, is not relevant in practice.

Developed for the long haul

If you like it quieter, you can drive up to 125 km / h with pure use of the electric motor. If you then switch back to high-speed mode, you can clearly feel the powerful four-cylinder by the noise. In hybrid mode, it also shows sprint qualities on request, which accelerate the V60 rapidly from 4,9 to 0 km / h in 100 seconds.

Nevertheless, the Volvo is not a piece of sports equipment and is not predestined for the slalom course. Its strengths lie in the directional and stable road holding, especially at high speeds, in the very well-engineered assistance systems with a relaxed driving system for semi-autonomous driving and in comfortable technical equipment that does not have to fear competition from BMW or Mercedes-Benz. The processing and the materials used are at a high level.

Anyone who frequently drives long distances with a high proportion of country roads and motorways will appreciate the adaptive cruise control as a relief for the driver. If you have a little more confidence in the technology, you can experience some additional features with the Pilot Assist System from Volvo. In addition to the adaptive cruise control, staying in the lane and unintentional veering out of your own lane are also supported.

In practical driving mode, the Pilot Assist function is activated by pressing the left thumb on the steering wheel button. In order for the system to function properly, the lanes used must be clearly marked. If no clear markings can be detected, the power steering can stop without warning. The driver must have both hands on the steering wheel and the system works for lane keeping up to a speed of 140 km / h.

The lane markings serve as a basis for orientation. If you let the steering wheel move with the system switched on, the distance to the right and left of the vehicle in the direction of travel is kept constant by the driving experience in the middle of the lane. In construction site areas, steering must then be taken over again independently. The adaptive speed control worked convincingly in our tests, all the silhouettes of the vehicles in front, from large-format trucks to graceful motorcycles, were clearly identified in good time and the distances were adjusted autonomously according to the pre-setting. When overtaking on the autobahn, the system intensively checks the surroundings again in advance and drives off a little more slowly than if you pressed the accelerator in person. Once you get used to it, the swerve into the overtaking lane can also be better adapted while driving.

If, like us, you cover around 1.000 kilometers a day, you will clearly notice the differences at the end of the day. After getting out of the car, we weren't nearly as overtired as we didn't have to do all the braking and acceleration on our own. From our point of view, primarily a great relief for the driver and a significant reduction in the risk of accidents while driving.

The new Volvo V90 in the tested R-Design variant is a high-quality business station wagon with a comprehensive range of safety systems. Those who frequently travel long distances will see the Pro Pilot Assist system as a relief. The consistently functional and ergonomic operation offers a comfortable driving experience. In particular, the assistance systems for semi-autonomous driving should be emphasized.