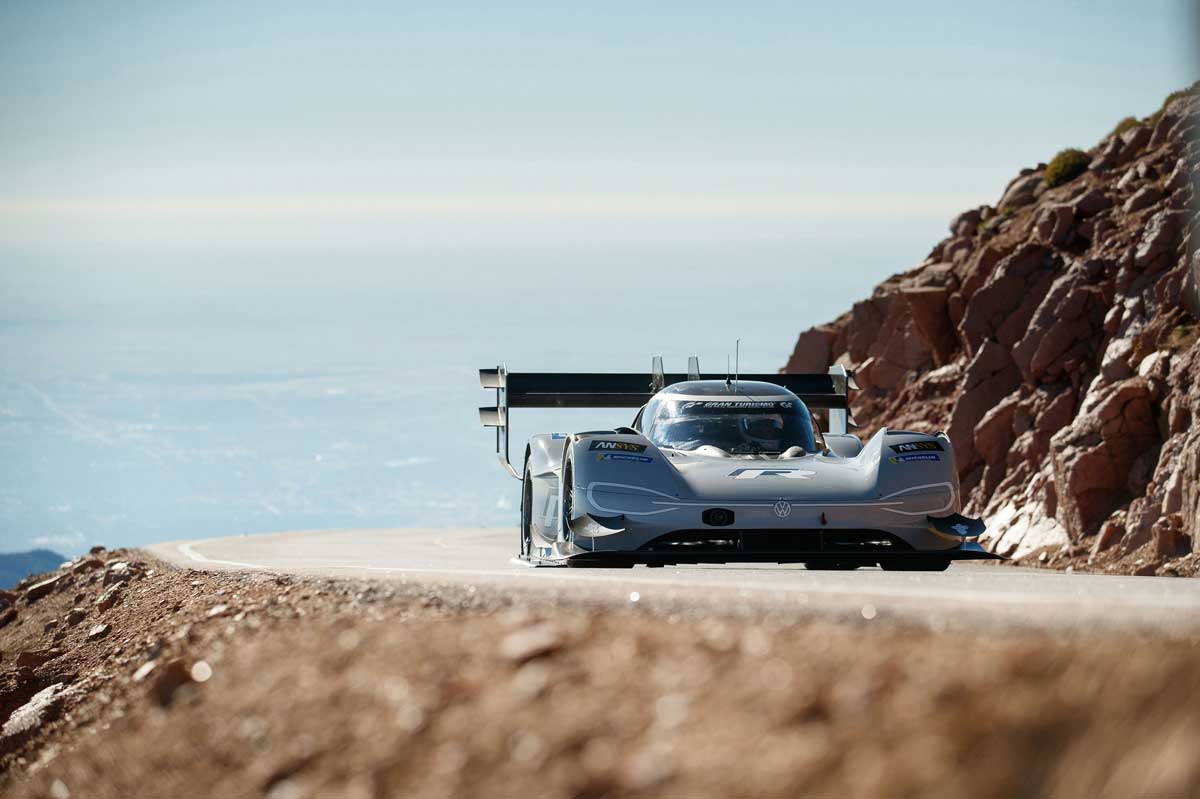 June 24, 2018 - Volkswagen's reorientation towards electric drives in the passenger car sector has been given a sporty look: The IDR Pikes Peak is considered to be the forerunner of the new, all-electric ID family. In the USA in Colorado, the legendary hill climb to Pikes Peak, the so-called “Race to the clouds”, has been a traditional race that has been held since 1916. The racetrack is 19,99 km long (12,42 miles) and has exactly 156 curves. After the diesel scandal in 2015, it was particularly important for Volkswagen to set a new tone with an electric sports car. And so the famous Pikes Peak 2018 was predestined for a start into the age of electric mobility from VW.

The goal was clearly defined from the start, a new record should be set for all-electric cars. The weather conditions play a decisive role when driving at top speed. At the start of the race it was slightly overcast with a temperature of 62 Fahrenheit - around 16,66 degrees Celsius. A light wind was blowing here from the west at a speed of 4 mph (6,43 km / h). The start takes place at an altitude of 2.862 meters.

When the legendary Pikes Peak hill climb started on June 24, 2018, Volkswagen put everything on the map of electromobility with the super sports car. In the “Race to the Clouds”, the self-imposed mission is to return as the new record holder. The driver of the sports car was the three-time winner on Pikes Peak Romain Dumas.

The goal was clearly defined and, according to Volkswagen, the prototype IDR Pikes Peak is a technology carrier and rolling test laboratory for the electric vehicles of the ID family, which is due to start in 2020. The spectacular hill climb is 19,99 km long and leads to an altitude of 4.302 meters.
The race has been held in a wide variety of vehicle classes since 1916. In the “Unlimited” category, in which Volkswagen is starting, the regulations allow engineers almost complete freedom. "We decided on this class because we can demonstrate our technological competence in a perfect way," says François-Xavier Demaison, Technical Director at Volkswagen Motorsport.

While his team concentrated on developing the chassis and drive train of the ID R Pikes Peak, among other things, Volkswagen Design created the shape of the body. “Our task was to transfer the unmistakable design language of the ID family to such an extreme and emotional racing vehicle,” said Klaus Bischoff, Head of Design at Volkswagen.

The specially developed racing car uses front and rear wings that are designed for maximum downforce. Two electric motors that drive the front and rear axles deliver a system output of 500 kW (680 hp). The electrical energy is stored in a lithium-ion battery, which is divided into two blocks next to and behind the cockpit. Around 20 percent of the energy required is generated on board, for example through energy recovery when braking. "With energy and charging management, we have gained fundamental knowledge that may also have an impact on the development of ID series vehicles in the future," said Willy Rampf, who advised Volkswagen Motorsport with his many years of experience in Formula 1 on the project Side stands.

According to Volkswagen, the ID R Pikes Peak had its world premiere on April 22, 2018 on the racetrack in Alès in the south of France. After extensive test drives in Europe, Volkswagen Motorsport relocated its base for the hill climb to the US state of Colorado and completed test drives on the original track at Pikes Peak, during which the set-up for the race was fine-tuned. The first test started on June 20, 2018. on site .. Volkswagen's hunt for the record for electric vehicles, which was currently 8: 57,118 minutes, began on Sunday (June 24) at 8 a.m. local time (16 p.m. CEST) . First, 24 registered motorcycles in nine different classes took to the track. This was followed by 67 cars in six classes.

The day of the decision

On the way to the destination, comparable to a difficult Tour de France stage in the Alps, a total of 1439 meters of altitude must be overcome for the motorcycles, quads and cars on the way to the summit. On June 24, 2018, it was only around 2 degrees Celsius with a slightly higher wind speed of 32 km / h. The Sumnit (the summit) is at an altitude of 4.301 meters, in this area the combustion engines lose up to 30% of their power because the oxygen content of the air is much lower. An ideal area of ​​application for electric vehicles that do not need oxygen for propulsion. The slightly higher weight of electric cars compensates for this disadvantage by being independent of the oxygen content in the air.

Because the electric racing cars have a much lower noise level, they drove to the summit with sound generators, for example a police siren in the Volkswagen. This should then warn the wild animals and above all the racetrack employees and media representatives in good time about the dangers. And Volkswagen had obviously already taken precautions and brought a total of 130 media representatives to follow the race to Pikes Peak. In this respect, according to the official streaming provider Matchsports, everything was perfectly prepared for the big showdown at the summit on the part of Volkswagen.

With the starting number 94 Romain Dumas started his Parfoceritt over the 156 curves to the mountain. Now it should show whether the escalating preparations, in which nothing was left to chance, should pay off in the end. Over 2.000 components from the 3-D printer had to prove their suitability for racing at top speed. Volkswagen has had to accept setbacks from its own racing past. The racing conditions are clearly defined. Only one attempt is available to the test subjects on this race day.

On this day, everything should go well for Volkswagen under the best of conditions. If you had been able to choose a suitable film music as background music beforehand, the epic Valkyrie Ride as an orchestral prelude to the third act of the opera Die Walküre including the sung battle cry of the mounted female spirits by Richard Wagner accompanied by the orchestra would have been a suitable background for the following spectacle. The ride was so impressive from the start that even the accompanying helicopters with their cameras struggled to follow the IDR. The journey to the summit took place at a breathtaking pace. In the end, the clock stopped at exactly 7: 57.148 minutes. And now it was clear to all players that this was an overall record for all vehicles used so far.

This time not only overshadowed the previous record time for electric cars, but also the best time for vehicles with internal combustion engines. Five years after Sébastian Loeb's record drive with the best time of 8: 13.878 minutes on a Peugeot 208 T16 Pikes Peak, the all-time record was clearly undercut by more than 15 seconds. Good proof that electromobility is more than competitive in racing.

Current trends and interesting reports can be found in the current issue. Subscription under