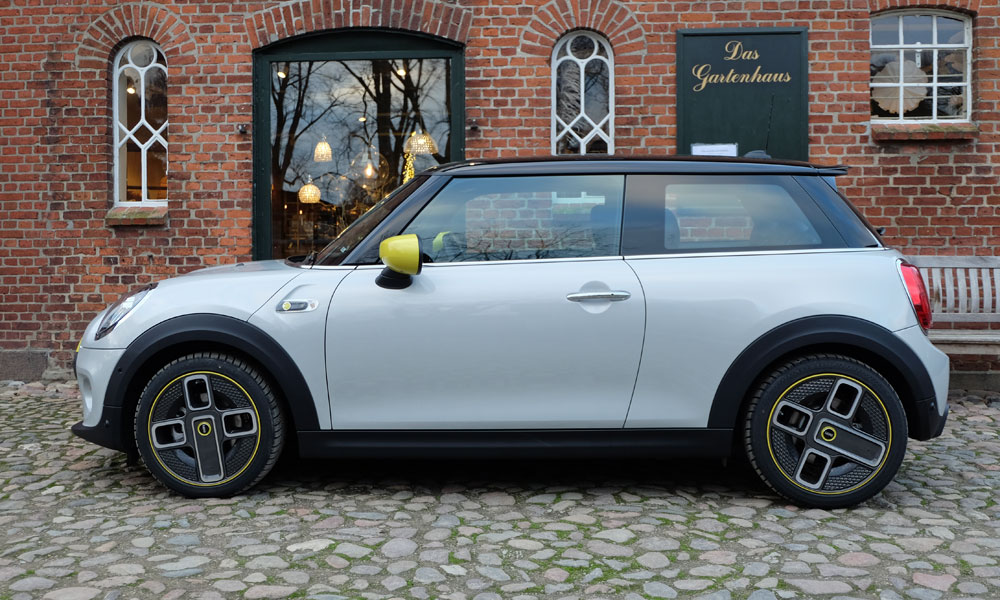 There are probably only a select number of cars that give the driver a hint of traditional values ​​and the future in an instant after entering the car. The electric Mini Cooper bravely defends its design language, which has been cultivated for decades, and leads its clientele to emission-free driving times. In our winter test, we tested the SE under cool conditions in the real north and learned some interesting details.

The recent history of the Mini has so far been shaped by three generations with different body styles and engines. With the delivery of the Mini Cooper SE in 2020, the only purely electric variant was launched. The compact Stromer is currently only available as a 2-door Cooper version with a motor and a battery pack. With an effective energy content of 28,9 kWh, the manufacturer specifies a range of over 200 km according to the NEDC.

In order not to strain the energy consumption on the motorway too much, the Cooper SE is cordoned off at a top speed of 150 km / h. Due to its appearance and its stylish elements in the interior, the Mini Cooper SE is more suitable as a style icon for appearing in the city. A fully equipped Cooper SE can cost 40.000 euros. With the environmental bonus, the price will be reduced significantly until the end of 2021. For this reason, too, the delivery times for current orders are not less than 6 months.

20 years of the BMW Mini

For the drive, BMW uses the BMW i3s modular system. In the Mini, the unit is installed under the front bonnet and drives the front wheels. With 135 kW of power and a torque of 270 Newton meters, the SE sprints very quickly through city traffic. The steering works with precise feedback from the road and the vehicle can be steered very precisely. A significantly lower center of gravity also allows hardly any fluctuations in driving. The overall package consisting of a firm chassis and the dynamic drive creates an appealing driving experience.

In addition, each Mini has its own entertainment value in the interior. A visually playful cockpit, where opinions differ, exudes an idiosyncratic esprit. The mighty round instrument in the center console sits enthroned above the climate control dials, the traditional toggle switches and the massive automatic selector lever. Does the knobbly fellow want to take part in the Monte Carlo Rally again? As soon as you have put in drive, the SE shows its sporty character. But of course it also has its very own e-character. The strong deceleration at the higher recuperation level or the strong spurt when pressing the power pedal are distinctive features. With a good 7,3 seconds in the sprint to 100 km / h, the Cooper swims perfectly on the urban and rural routes. Compared to small cars with gasoline engines, the Cooper reacts much more directly to every small pressure on the power pedal and converts it much more directly into speed.

Mini in the winter endurance test

When overtaking on the country road, this is a major safety advantage, the acceleration from 80 to 120 km / h is tight in 4,5 seconds, even the more powerful Mini John Cooper Works needs well over 5 seconds. Most electric car enthusiasts can be enthusiastic about these quick moments in everyday car life alone. On the other hand, the fun is slowed down a bit by locking the top speed on the autobahn. But it is foreseeable that speed limits will also be introduced on the autobahn, as in neighboring countries.

Friday morning in December, 1 degree Celsius, and fogged windows at the start of the day. The battery capacity display shows 65%. The remaining range, on the other hand, is only shown at 70 kilometers. While consumption values ​​between 12 and 18 kWh / 100 km can be achieved in the summer tests, these are significantly higher in winter. Even if you consciously forego all comfort functions, in our tests in the city and on the country road between 20 and 28 kWh / 100 km of electricity consumption are the ice-cold reality. And so the real range with a fully charged battery was reduced to 110 to 130 km to the next charging station during our test drives.

The Cooper can be charged with alternating current with up to 11 kW and with direct current with 50 kW. The charging times vary depending on the charging station used. After fully charging in winter, the car showed a range of 140 to 150 km. The low outside temperatures and the consumption for heating and ventilation of the windows take their toll.

The distinctive and idiosyncratic interior design of the Mini contributes to the image. In particular, the emphasized infotainment system in the center console looks tidy and can be operated using the familiar BMW handwheel or directly by touch. The operation can be operated intuitively after a few moments. All essential driving information is clearly visible on the head-up display above the steering wheel.

The leather seats in the test car were well handcrafted and provided excellent lateral support. They can be individually adjusted to the respective size. If you move the seat all the way back for tall drivers, however, there is no longer any leeway for the knees and legs in the rear. The individual composition of the Mini Cooper SE is no longer the focus of the current model. There are four equipment lines to choose from.

The basic model for 31.681 euros can only be ordered in gray or white metallic paint, but it comes with a three-phase charger, heat pump, LED headlights, sports seats, automatic air conditioning and navigation system as standard. In the higher-quality trim variants, the equipment features are expanded to include seat heating, matrix light, sound system, adaptive cruise control, reversing camera or leather seats. A special highlight of the XL variant is the panoramic glass roof. But even with this comfortable equipment variant, it remains under 39.500 euros. After deducting the subsidies until the end of 2021, this leaves around 30.000 euros.

There is currently only the two-door Cooper model as a pure Stromer. However, this spreads with its charm and esprit an incomparable, quiet and environmentally friendly driving pleasure. The idiosyncratic dynamics of the electric motor make the Cooper SE an interesting city stromer. With the next generation of the Mini, the selection of electrified model variants will be significantly increased.

There are more trends and practical tests in the current magazine. Subscription under