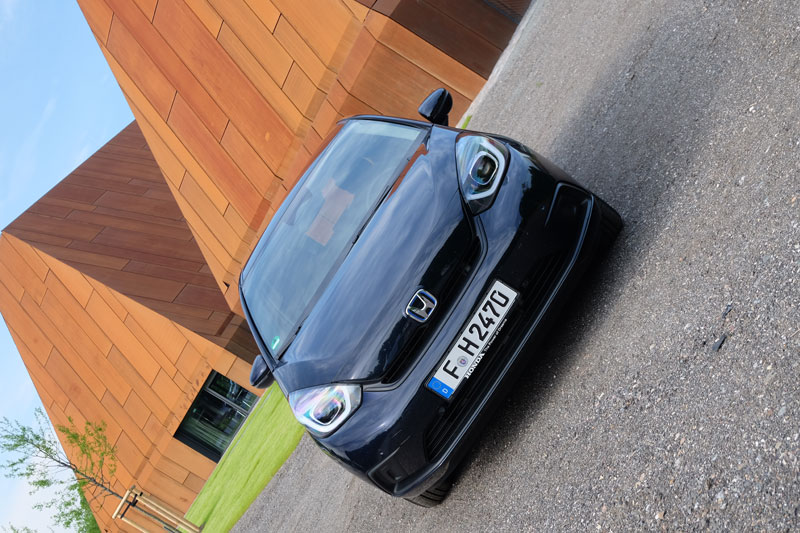 The Japanese compact car Honda Jazz is currently in its fifth generation since 1991. The Jazz has also been sold in Germany since 2002 and became a Honda bestseller in the first few years. The new self-charging electric hybrid is equipped with the hybrid system i-MMD (intelligent multi mode drive). In the current version, the body has become noticeably more rounded and has been given clearer contours with the new front. For the starting price of 22.250 euros, Honda relies on a comparatively high level of technical equipment and low CO2 values ​​in everyday life. During the test, we focused on suitability for everyday use.

The new drive consists of the 1,5 liter four-cylinder petrol engine based on the Atkinson principle, which works with variable valve control. The engine works with a very lean mixture during combustion and is therefore more economical in consumption and produces lower emissions. In addition, a generator driven by the engine ensures the production of electricity for the compact 0,86 kWh battery. This battery feeds the electric drive motor. Depending on the load and battery charge level, the Jazz is fully electric, partially electric or powered autonomously by the combustion engine.

The flexible back seat

Honda relies on a technically fully equipped car for the Jazz with the high entry-level price. Starting with the basic model, this includes the emergency brake assistant, the active lane keeper, adaptive cruise control and traffic sign recognition. LED headlights with high beam assistant, heated seats, a radio system with 5-inch display and a 7-inch digital cockpit. The innovative jazz moment is the creation of practical storage space behind the front seats with the “Magic Seats” in the rear. These can be easily folded up like cinema seats.

With the Honda + app you can access additional functions such as the navigation system to operate quickly and easily and to lock or open the car. In the higher-quality equipment variants, there are other interesting digital assistants such as the blind spot assistant, adaptive cruise control and traffic sign recognition. The safety aspects were placed high for the small car. Accordingly, the rating in the NCAP security test in 2020 was five stars.

Visually, the new jazz has a few peculiarities that are met with divided echoes. On the front triangular window, the line rises in the direction of the windshield instead of continuing the continuous lower edges of the window. This also emphasizes the relatively high bonnet, which then slopes down towards the bumper.

If you take a seat in the new jazz, you will particularly like the good all-round view and the tidy cockpit. The central infotainment system in the middle of the dashboard could be placed a little higher. The operation with the angular tile elements is still reminiscent of the old tile look of Nokia cell phones. In return, the large-format symbols make them easy to use intuitively while driving. With the navigation system that is used more frequently, operation is complex because of the diverse submenu items. The connectivity with the smartphone, on the other hand, is a digital treat for tech-savvy drivers.

Despite the extensive equipment, the weight is moderate at 1.250 kg. The Jazz can be moved correspondingly quickly, especially in city traffic and on country roads. With the support of the electric motor, it also demonstrates its advantages in terms of consumption. The consumption values ​​here are often between 3 and 4 liters of premium petrol, outside of towns 4 to 5 liters in the 2021 summer test Autobahn on the other hand, you can land at well over 7 liters. The well-known disadvantage of continuously variable automatic transmissions on motorway routes at recommended speeds is the loud engine noise caused by the high speeds.

Honda is now celebrating its 60th anniversary in Germany and has established itself in the niche for high-quality cars. After the first sales successes, Jazz is in somewhat calmer waters in the beginning, but it still has a loyal fan base among Honda customers. With the current model, there should be some interested parties, because with the Honda Jazz Crosstar there is the SUV in a large-format crossover version.

The current Honda Jazz is currently one of the few full hybrid versions in its vehicle class. The trendy jazz can be used optimally in the city and country road area, moderate consumption values ​​and the good exhaust gas values ​​speak for the compact city runabout. The practical smartphone connection and the apps are also suitable for everyday use in the new version.