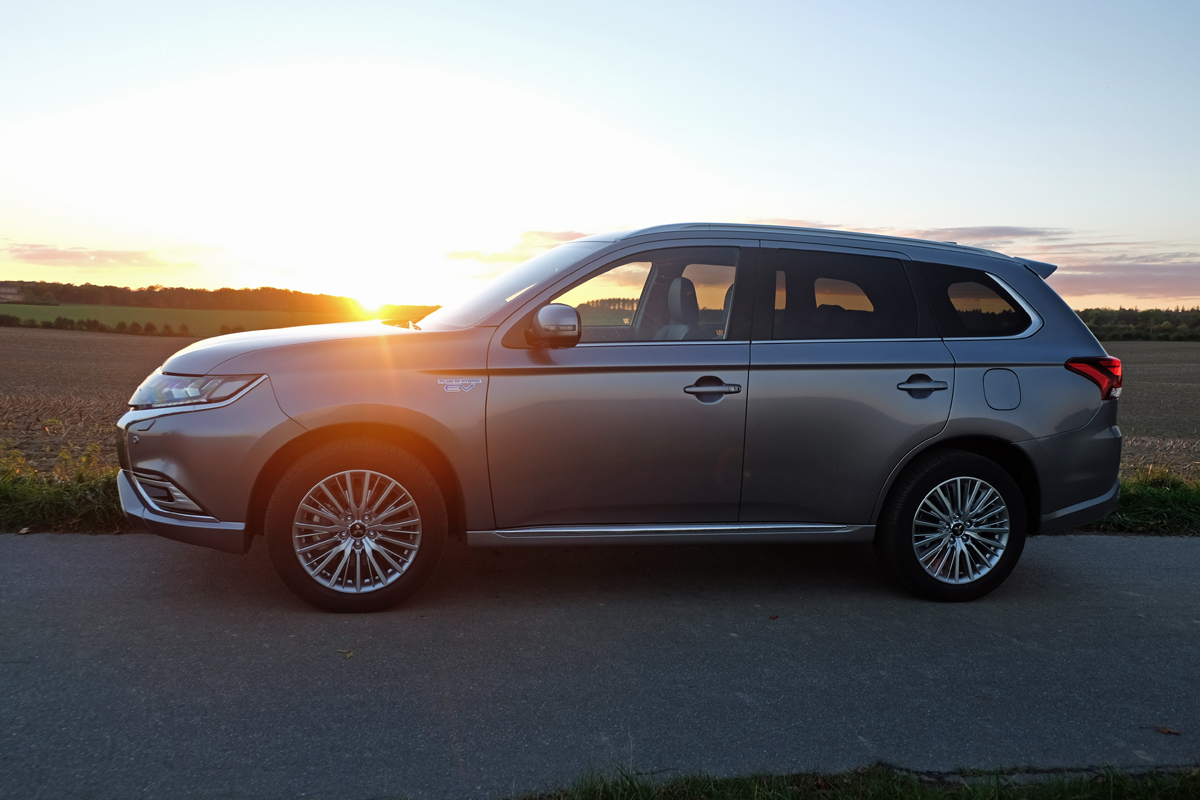 For Mitsubishi, the Outlander is a figurehead in sales and corresponds to the current zeitgeist. This year, no other SUV will be registered as a plug-in hybrid more often than the Mitsubishi Outlander PHEV. For the next few years, the interior and drive were upgraded accordingly. We take a look at the special features and qualities in the on- and off-road area.

While there are still far-reaching model changes to be made in the coming years for many models at Mitsubishi, customers have been very positive about the Outlander PHEV so far. The competitive situation to the VW Tiguan, Kia Sorento or Hyundai Santa Fe is far. But at least the Outlander has so far secured a permanent place in the plug-in hybrid version among SUVs that can be charged at the socket. The new model from 2019 has been on the market since September from a list price of 37.990 euros and still benefits from the environmental bonus.

The changes in the external appearance are subtle. The front grille was given a honeycomb structure. It is also characterized by a more modern design of the LED headlights and a new roof spoiler to improve aerodynamics.
Under the hood, next year's models were fitted with a more effective 2,4-liter DOHC engine. Thanks to the crank mechanism and the variable valve control, the engine works in the low and partial load range in the so-called Atkinson cycle in the high load range like a normal Otto engine. The internal combustion engine has an output of 4.500 rpm. at 99 kW (135 PS) and a torque of 211 Nm. It looks much quieter than in the previous model; The acoustics in the interior are also much more relaxed thanks to better noise insulation.
The two electric motors used have been retained. There is a 70 kW (95 PS) electric motor in the rear and a 60 kW (82 PS) generator at the front. The battery capacity has been increased slightly to 13,8 kWh. According to the manufacturer, this increases the purely electric range under optimal conditions to up to 54 km. The achievable top speed in the switchable electric mode has also improved to up to 135 km / h.
The internal combustion engine takes on the role of a power plant for the generator, which generates the electricity for the electric motor in the rear, especially in low and partial load ranges. As soon as you request maximum power via kickdown, all engines work together and accelerate the two-ton Outlander to 10,5 km / h in around 100 seconds. The maximum speed is 170 km / h.
The original goal is the combination of the components for a consistently electric operation in normal driving. During journeys in the city and normal journeys on the country road, one mainly hears the quiet sound of the electric drive.

Mitsubishi wants to appeal to a large number of users with the 2019 model year. In addition to the traditional equestrian target audience supported by the manufacturer, many customers are also interested in the wide range of uses in trailer operation and off-road use.
Outlander can be set up in a versatile and extremely individual way for all users. It starts with the directly selectable energy-saving ECO mode, which can be selected via a push button in the center console, and continues with the switchable, pure electric mode, for example in urban or residential areas.
The repertoire of settings is expanded by the option of selecting the recuperation level. The level can be set on the steering wheel. With the increase, the generator then acts as a brake. As soon as you take your foot off the accelerator, the electricity generated increases. You can't do without the brakes entirely with the Outlander, but there is also a noticeable potential for savings due to the high curb weight.

A few details have been improved in the interior. The seats are a little more comfortable and offer significantly more lateral support than the previous model. In the best version, the seats clad in black leather - combined with quilted door panels - exude their own charm. The selection of the control elements has been rearranged according to the customers' ideas. Everything can now be operated more intuitively. The instrument displays are strongly accentuated in color and ensure that the values ​​are easy to read. The touchscreen of the multimedia display in the middle appears a bit small at first glance, but it has a good screen resolution. Following the trend of the times, Mitsubishi relies on the drivers' smartphones. The interactive navigation system can be used directly using Apple Carplay or Android Auto.

Mitsubishi specifies the theoretical NEDC consumption value given at 1,8 liters of Super plus 14,3 kWh per 100 km. Since nobody will recharge the battery for 100 hours at the household socket after every 5 km of driving, it turns out that if the recuperation is only used, 5 to 7 liters in our test in the context of the very warm daytime temperatures between 10 and 20 ° C at different Route profiles have been achieved. That is a moderate test value and makes the diesel engine superfluous.
If you want to use the electric mode on a current basis more often, the CHAdeMO connection included in the standard equipment is interesting. The infrastructure with fast charging stations is growing continuously in the north. In the meantime, we used different providers during the test drives. Charging at the CHAdeMO connection up to 80 percent battery capacity takes only 20 minutes and can be used perfectly during a break in driving. Then the sockets in the car can then be fed from the battery.

Outlander as an energy supplier

In the interior, the 4,70 m long SUV as a five-seater offers enough space for all occupants. The interior definitely offers a club atmosphere and is predestined for long-haul journeys. The "Intro" version we drive with quilted leather seats with piping and contrasting stitching includes extensive standard equipment. Technical details such as a reversing camera, adaptive cruise control, a blind spot assistant and a light and rain assistant make everyday driving much more relaxed.
Bidirectional use of the battery is now standard at Mitsubishi, and the higher equipment variants even include two sockets in the Outlander's repertoire. This means that LED lights, an electric grill or a notebook can easily be operated on the move. This significantly expands the group of users for freelancers who want to use their technical equipment comfortably away from home.

Of course, there are still a number of options for off-road use for the heavy SUV. You can switch directly to permanent all-wheel drive at the push of a button in the center console. We also extensively tested the off-road properties on site. With the long wheelbase and ground clearance, the vehicle is predestined for easy off-road routes. The Outlander shows off its all-wheel drive properties on sandy side roads, for example when towing a trailer, on the rain-washed surface and on muddy paths. The all-wheel drive was able to demonstrate its advantages excellently on the route profiles we selected around the area in the Segeberger Forest with very varied secondary routes on furrowed forest stretches through to uneven dirt roads.

The Outlander meets the trend towards the practical SUV. With extended off-road properties, this leads to a reasonable price-performance ratio. Measured against the high curb weight, it is relatively moderate in consumption and thus replaces an alternative to a comparable diesel. The practical possibilities of use are versatile and range from usable sockets for mobile electrical devices to braked trailer loads of up to 1,5 tons.

More information and details can be found in the 2019 winter edition. Subscription at