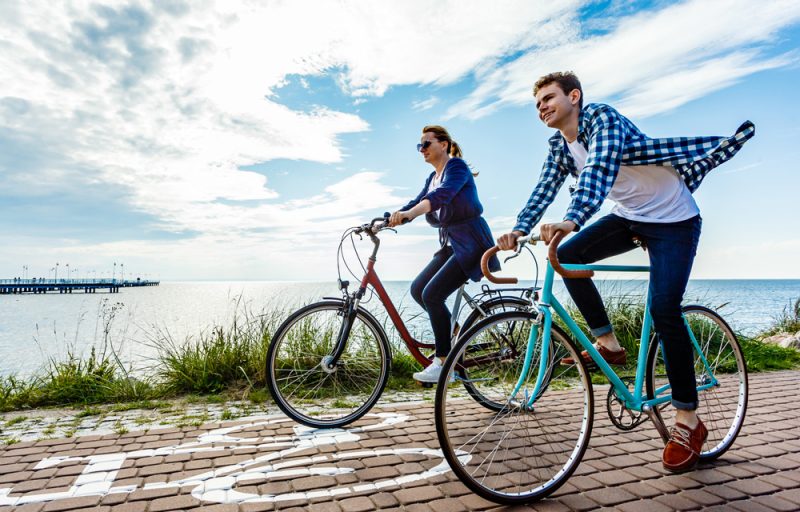 In addition to the electric vehicle, another means of transport is also suitable for driving through the city quickly and emission-free: the bicycle. But in many cities, cyclists are barely taken into account in traffic management, and accidents often happen because the cyclists are simply overlooked by vehicle drivers. In order to prevent this, more and more rapid cycle paths are being built in Germany, which not only give cyclists more safety, but also improve the quality of the traffic flow and bring cyclists to their destination faster.

So far, high-speed cycle paths or well-developed cycle paths have been few and far between in Germany, despite the great potential that cycling has for the future of mobility. Cycling is not only attractive for short journeys: thanks to high-speed cycle paths and the use of e-bikes (see info box), you can also cover longer distances. The benefit lies not only in the physical and mental health of the cyclists, but also in the environment thanks to the lack of emissions. The municipalities also benefit from increased bicycle traffic, as fewer cars mean better quality of life - less traffic in the city centers, less space for parking spaces and less noise are just some of the aspects.

Compared to our European neighbors, Germany lags significantly behind in the area of ​​cycle superhighways. In the bicycle country of the Netherlands, the first bicycle routes were tested as early as the 1980s and a nationwide program was started in 2006 with the aim of creating bicycle superhighways in metropolitan areas nationwide. A network of 2025 kilometers of cycle superhighways is to be built in the Netherlands by 675. Also in Switzerland, Norway, Great Britain and especially Denmark, cycle highways are on the rise. In Copenhagen alone, nine routes with a total length of 2018 kilometers had been implemented by 200 - since then, around 25 percent of commuters have demonstrably switched from cars to bicycles. And the Scandinavian neighbor Norway, which is already leading in the field of electromobility in Europe, wants to increase the proportion of bicycles in urban regions from the current 5 to up to 20 percent and thus reduce pollutant emissions by up to 50 percent.

Especially in metropolitan areas with commuter routes that are at risk of congestion, high-speed cycle routes are a good alternative to motorized private transport. According to the road traffic regulations, there are still no clear signs for cycle superhighways, but there are general quality criteria. A continuous separation of bicycle and pedestrian traffic is urgently necessary and pedestrian crossings and crossing aids are also possible to cross a bicycle superhighway. Cycle superhighways should also have few inclines and a certain minimum width (in North Rhine-Westphalia, for example, 4 meters). The road surface should be designed in such a way that it is safe and easy to drive on even at higher speeds of up to 40 km / h, as e-bike drivers will also use the routes. Of course, regular cleaning and winter service as well as sufficient lighting for cycle superhighways in town make sense.
Due to the wide road layout, unlike on conventional bike paths, you can also ride next to each other and overtaking is also much easier on the expressways. Since the right-of-way rule - should busy roads have to be crossed - is usually in favor of cyclists, cyclists are much faster on the expressways than on normal cycle paths. A safer and more comfortable feeling thanks to the trouble-free cycling without annoying getting on and off at traffic lights and crossings is another advantage of the cycle expressways, which can also be called cycle routes.

North Rhine-Westphalia is a pioneer for cycle superhighways in Germany. The federal state has already developed the first binding criteria for high-speed cycle routes at the state level and is planning a broad network of high-speed cycle routes, i.e. connections on which cycling times can be shortened. A total of seven such large cycle superhighways are in the planning stage, and the first kilometers have already been completed. The first expanded route is to be the Ruhr RS1 cycle expressway - the first, 10-kilometer section was completed in November 2015.

Radschnellweg Ruhr RS1 will not be completed until 2030

The Ruhr RS101 cycle expressway is to run from Duisburg via Mülheim, Bochum and Dortmund to Hamm, over a total distance of 1 kilometers. 1,65 million people live in the future catchment area of ​​the RS1 and around 430.000 jobs are located along the planned cycle expressway. In 2016, the 5-kilometer route from the city limits of Essen to the main station in Mülheim was opened. The cycle path on this section of the route is extremely impressive: high above street level over the city viaduct.
In addition to the RS1, the longest cycle expressway with a planned 101 kilometers, six other cycle expressways are planned in North Rhine-Westphalia. The Westmünsterland cycle expressway with a length of 45 kilometers connects Isselburg on the Dutch border with Coesfeld in the Münsterland. The shortest of the planned cycle superhighways will run with a length of 8 kilometers between the cities of Frechen and Cologne.

The RS1 cycle expressway will probably not be completed until the end of the decade. After a small question from MP Carsten Löcker (SPD) to the state government of North Rhine-Westphalia on January 25.01.2022th, 2030, the answer shows that the last sections will probably not be completed until XNUMX due to the lengthy planning and approval processes.

The Frankfurt-Rhein-Main region is considered a commuter stronghold - around 5,7 million people live in over 460 cities and communities. Larger cities such as Frankfurt am Main, Darmstadt or Wiesbaden are in close proximity to one another and, thanks to their complex commuter flows, offer good potential for the expansion of high-speed bicycle connections. And so a number of high-speed cycle paths are already being planned in the region, for example a high-speed cycle connection that will connect the cities of Frankfurt, Maintal and Hainau. A direct bike connection Frankfurt - Darmstadt is also planned.

The eRadschnellweg in Göttingen in southern Lower Saxony is the first cycle expressway in Germany that runs centrally through a city. The 4 kilometer long cycle expressway serves as a test phase, which demands e-bikes, i.e. electric bicycles, place on the infrastructure and whether the offer of a cycle expressway encourages more commuters to leave their cars and instead take their bikes or e-bikes to work to drive. And the test phase was successful: According to a counting station, around one million cyclists used the e-bike expressway in 2016, i.e. between 3.700 and 4.200 cyclists a day. Other sections of the route are also being planned or under construction, and the cycle traffic development plan will be continued.

The Hanseatic City of Hamburg has presented a real cycle route concept. The goal of the Hamburg Senate of increasing the share of bicycle traffic to 2020 percent of all journeys made in Hamburg in the 25s is now to be achieved through the implementation of a bicycle traffic strategy. 14 individual cycle routes with a maximum length of 42 kilometers and a total length of 280 kilometers are to connect the individual rings of Hamburg with one another and at the same time also take tourist destinations into account. The cycle superhighways are not only suitable for everyday commutes, but are also intended for tourists or locals who want to get to know new, unknown sides of Hamburg. 12 bike routes are therefore to run in a star shape from the Rathausmarkt to the outer city districts and two routes are planned as ring connections between the residential areas of the inner and outer city. Plans for the bike routes are already available online, because on many sections the bike routes in Hamburg are already largely passable away from the main roads through 30 km / h zones and on bicycle roads.

The capital of the northernmost federal state of Schleswig-Holstein is regarded as the most bicycle-friendly city in northern Germany and now offers 13 cycle routes (no cycle expressways). Veloroute 10 is the first cycle expressway on these Veloroutes.

So far, 7 city connections are planned in the greater Nuremberg area, which will be split into 10 routes, for example routes between the cities of Nuremberg, Fürth, Lauf, Oberasbach and Erlangen. The longest route with almost 19 kilometers should lead from Fürth to Schwabach. None of the expressways has yet been completed, they are still being planned.

While in some cities and municipalities there is already clear progress in terms of cycle superhighways, there is still a clear need for action in other regions. The neighboring countries are already showing how it is done. Cycle superhighways are not only good for the quality of life in cities, but also for the environment and your own health. Maybe today for a change you can leave your car behind and use your bike - every kilometer by bike is a clean kilometer. The environment will thank you!

Article from the green car magazine

Cover picture: Out and about by bike - Copyright Jacek Chabraszewski @ fotolia.com