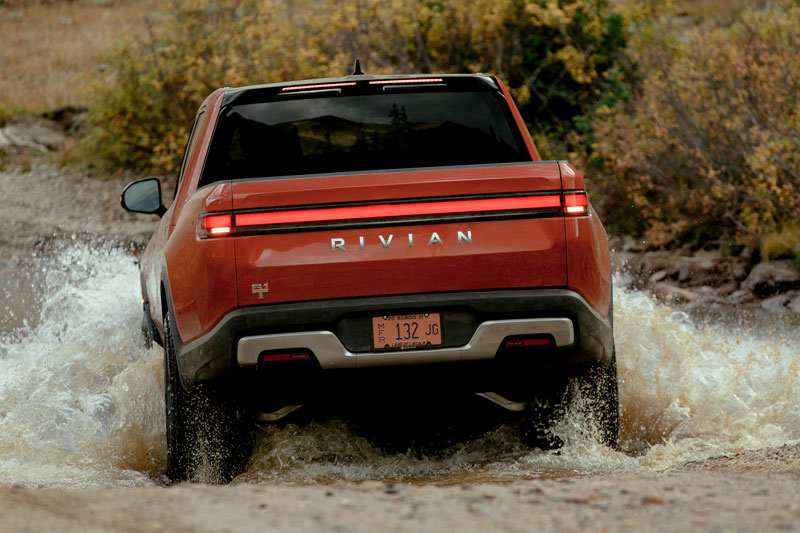 No normal automobile in the US has the popularity ratings of an SUV or pickup truck. In the American TOP TEN list for new registrations, according to the statistics from "Focus2Move", the three large American cars Ford F-Series, Ram Pickup and the Chevrolet Silverado share the top spots in the registration statistics in the first half of 2021. The manufacturers had to watch almost in disbelief as a start-up of all people went into series production of the first US pickup with a purely electric drive in September 2021. Despite all the speculation about new models from Tesla, Lordstown or Atlis, a milestone for emission-free pickups was set with the Rivian R1T. This signal had a massive impact on Rivian's price development.

The first electric pick-ups from the leading US manufacturers are still in the run-up and will not follow suit until the end of 2021 with the GMC Hummer EV, in spring 2021 with the Ford F-150 Lightning or not until 2024 with the Ram 1500 BEV. Meanwhile, since Rivian's IPO, the share price has more than doubled from $ 78 to $ 172 in a matter of days. The value of the car brand was thus already 16.11.2021 billion US dollars on November 151, 140. After just a few days, this start-up is already ahead of Volkswagen (79,37 billion US dollars), Ford (91,42 billion dollars) and General Motors (XNUMX billion dollars) in the global ranking.

In order to draw a comparison with Volkswagen, the sales figure for Volkswagen from 2020 alone is sufficient with 8,9 million vehicles worldwide. In contrast, the 300 or so vehicles of the R1T pick-up truck that have been registered so far seem like a microcosm. As with all global manufacturers, production is currently on hold. According to Rivian, there have already been over 50.000 pre-orders for their plant in Normal, Illinois. Against all odds, the share price surfed on a huge wave of expectations, finally at the stock market known to act on the future.

A number of new investment programs also fueled the course fireworks. US President Joe Biden has introduced an infrastructure law that will invest trillions of dollars in the renovation of roads and bridges, railways and airports. 7,5 billion US dollars are intended for the expansion of the charging infrastructure for electric cars.

Even if the value from 16.11.21/XNUMX/XNUMX seems exaggerated, there is a lot of potential for the further development of the young start-up.

Despite numerous supply chain adversities, Rivian has consistently increased production numbers in Normal, Illinois, peaking at 3 vehicles in Q2022 7.363. The course of the start-up suffered a significant dent in October because 13.000 cars had to be brought into a recall campaign due to problems with the steering knuckle attachment. The course then crashed briefly on October 18.

In the meantime, however, this turbulence has also been overcome thanks to the courageous and speedy recall campaign. In the meantime, Amazon has become an investor in Rivian and ensures continuous development. According to initial plans, Amazon wants to market 2030 RIvian delivery vans by 100.000. This is a clear signal on the market and will bring further growth for Rivian.

For decades, Ford has led America's sales territory with the legendary F-Series, but now Rivian is being given a new long-term role as the key contender in an exciting battle for the top of the auto market. While the large-format SUVs are made for the American market, they are definitely too powerful for road traffic in Europe. A more compact model will be required for global distribution.