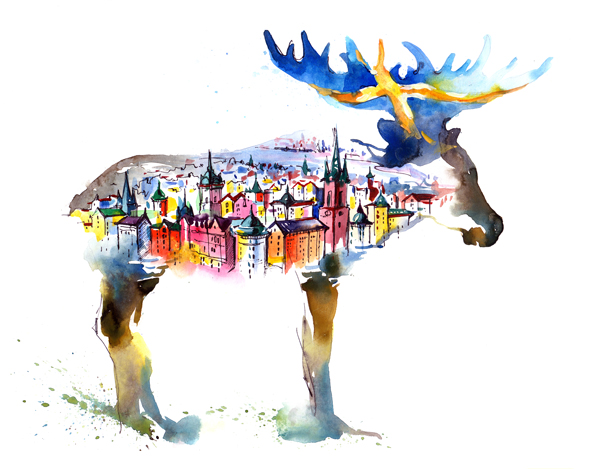 If you want to spend your vacation in Sweden, you can expect a completely different experience in advance than when you are in the tourist regions in the south or in Germany on the Baltic or North Sea right in front of your home door. Deceleration is clearly in the foreground here. In terms of area, Sweden is around a quarter larger than Germany with only around 10 million inhabitants. For holidaymakers in Sweden, the focus is primarily on the experience of nature, from the white beaches to the vast forests and meadows. The metropolitan areas in the south - primarily Stockholm, Gothenburg and Malmö - provide the cultural highlights. In these regions, a varied and diverse cultural program ensures variety. The idyllically beautiful holiday region of Småland is also interesting, with mostly flat land and idyllic, dense forests; but also a multitude of lakes and coastal strips ensure the right holiday mood for outdoor fanatics.

Prepare for your vacation in Sweden

First of all, the climatic conditions should be taken into account, due to the proximity to the Gulf Stream, Sweden has a comparatively mild climate and a high amount of precipitation per year, especially in the south-western areas. The differences between northern and southern Sweden are very different. There will hardly be really hot temperatures in summer, but winter is very different in the regions. The north of Sweden is dominated by very long and cold winters with few hours of sunshine, while it is more mild in the southwest. During our stay in the southwest in typically Scandinavian Småland, milder winters and many hours of sunshine and often warmer daytime temperatures can be expected in summer.

The Everyman's right regulates the handling of animals and plants and says how, where and how long you can stay in the great outdoors. Everyman's right is not an independent and not a written law, but a customary right, the roots of which go back to the Middle Ages. However, some of the rights contained in the right of public access are specified in various laws, for example in the Hunting Act. Camping is allowed in almost all regions, as long as the campers neither disturb nor destroy. This does not apply to private property and designated protected areas.

Those who prefer to relax in a holiday apartment or holiday home will find what they are looking for in southern Sweden. From small apartments to comfortably equipped houses, all conceivable accommodations are offered: either directly in nature or closer to the water of the Baltic Sea coast. We have chosen the west coast region of the Schonen (Skåne) region directly on the Kattegat on the Swedish side. The Kattegat is the 22.000 km² large and on average around 80 meters deep, extremely difficult to navigate marine area between the Danish Jutland and the Swedish west coast. The easiest way to get there is via Denmark via Copenhagen and via the Öresund Bridge in the direction of Malmö.

Which sights are worth seeing on the west coast?

Sweden has an almost endless list of cultural treasures that are worth seeing and worth visiting. A complete listing would undoubtedly fill several pages here. We look at the large and small towns along the west coast of the Kattegat that we visited on our trip. Here you can decide on site whether you want to take a look at history, visit the historic old towns, discover the innovative new products or simply enjoy the long stretches of beach.

Malmö in the province of Skåne

All roads in the beautiful province lead to Malmö. The city is part of the expanding Øresund region and connected to the Danish capital Copenhagen by the huge Øresund Bridge. Malmö has set itself the goal of becoming a sustainable city. It is a world leader in this field. In addition to the problem areas of the city, many parts of the city are currently being rebuilt. Malmö is developing especially around the old town up to the 2,5 km long Ribersborg Beach as a meeting point where young and old, the rich and beautiful of Malmö and visitors from all over the world meet to swim in the To lie in the sun or just to relax and enjoy the sunny summer months. The beach is within easy walking distance of the city center.

Helsingborg in the province of Skåne

Helsingborg is the second largest city in the province after Malmö and also has the second largest port in the country. Here the origins as a castle fortress can still be seen in the cityscape. Due to its strategic location on the Öresund, the city was more often involved in armed conflicts in the past centuries. Each district has an individual character. The historic old town (Gamla stan) is provided with buildings, some of which are several centuries old; But there are also housing estates on the outskirts of the city such as Drottninghög, which were created with the help of a nationwide housing project by the Swedish government, or urban villa areas such as Olympia from the city's economic heyday and more rural areas such as Råå.

In addition to fresh sea air and delicious fish, you get some special features such as Sofiero Castle, the history of which goes back to 1864, when Prince Oscar and his wife Sophia von Nassau paid a visit to the “Pearl on the Sund”. Today the castle serves as a backdrop for current exhibitions and events and a visit to the well-tended castle garden is definitely worthwhile.

One thought on "Experience Sweden - Travel 2023"