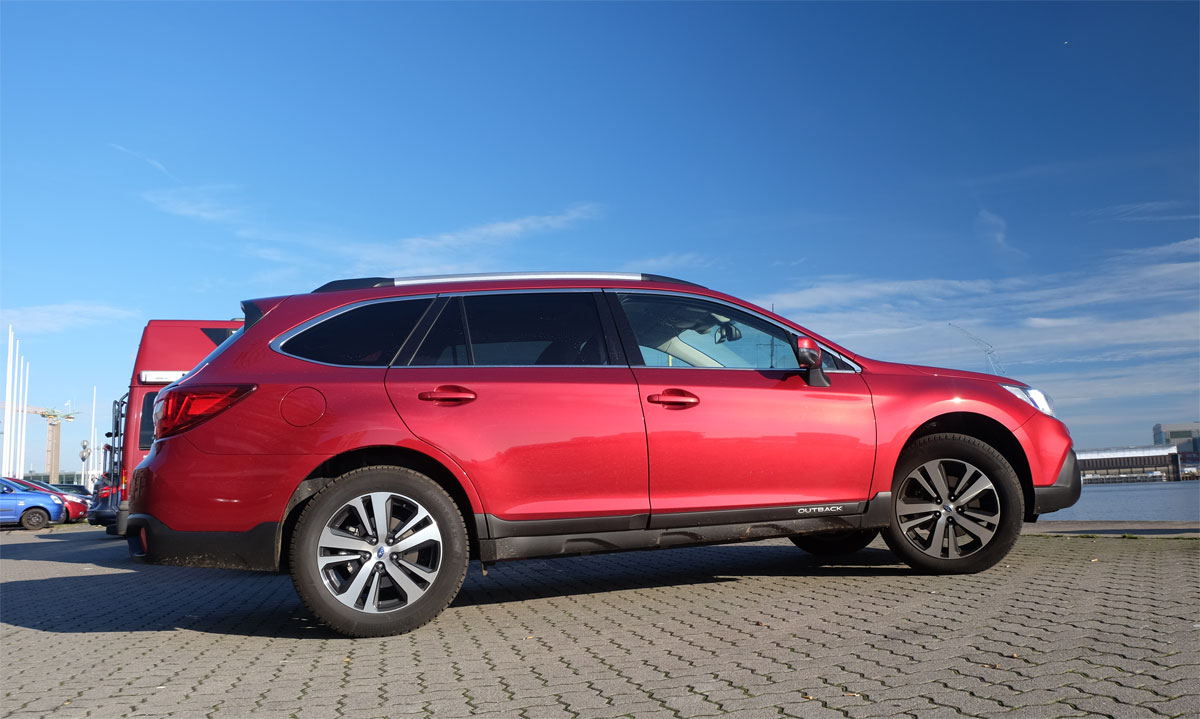 Subaru Outback 2,5i Sport - Eyesight in the endurance test

A manufacturer such as Subaru, which is relatively small in the world market, has to make an effort to come up with a clear concept. Therefore, certain unique selling points are important in the highly competitive automotive market. Subaru has consistently relied on four-wheel drive, the boxer engine and a sophisticated emergency braking system for decades. In the coming years, the transition to electromobility will also be initiated. A look at a special vehicle concept and the Eyesight system.

In the interior, Subaru has plenty of space for five adults with easily configurable front seats and a rear bench with plenty of leg and headroom. The cockpit is designed to be consistently businesslike. The "Eyesight" driver assistance system used in other Subaru series is standard equipment even in the basic equipment. It is based on two camera sensors that generate a stereoscopic image. According to Subaru, the result is: a high level of accuracy in the detection of possible obstacles and the resulting warnings and interventions. It includes collision avoidance, lane keeping and lane guidance assistant as well as distance cruise control. In the highest equipment "Sport" there are also blind spot warning systems as well as lane change and cross traffic assistants on board. The top version also offers heaters for the steering wheel and rear seats.

Eyesight in a practical test

For the outback, the focus is on a comprehensive security package. It is available as standard equipment for almost all models and is an advantage over many competitors who often only offer assistance systems at an additional cost. The two camera lenses placed next to the interior mirror form the basis for this system. They create a stereoscopic image of the situation in front of the car. The aim is to identify possible sources of danger at an early stage, for example obstacles or passing pedestrians. Corresponding warnings are then given to the driver or interventions are carried out using the emergency brake assistant.

The system is coupled with the automatic transmission. This makes it easier to access the drive train for the adaptive cruise control and ensures a quick reaction in dangerous situations. The system was only scrutinized in the summer of 2017 in the ADAC comparison test. In the typical simulated dangerous situations such as "parked cars", "dirty window - poor view", "sensor blind - no view", "restart" or "wet road", the system in a Subaru Outback was upgraded with the systems of a VW up! and a Seat Ateca compared. The ADAC's verdict on the tests was as follows: Eyesight warns the driver in good time and automatically initiates emergency braking if necessary - according to the automobile club, this ideally prevents accidents completely.

In the situations listed, an impact was avoided in all tests or the driver was warned in good time. At the same time, you should also take a look at the manual for the Subaru Eyesight system. Of course, the system cannot resolve certain situations. According to Subaru, obstacles below 1 meter in height such as property walls or animals are not identified as a disruptive factor. Further restrictions are described in detail in the manual.

During our test drives, we mainly tested the properties off-road and under difficult road conditions. Forest and field paths as well as soft surfaces were extensively thinned with the permanent all-wheel drive system. Despite the high structure, a low center of gravity - aided by the built-in boxer engine - ensures stable road holding. The high ground clearance of 20 cm and reliable all-wheel drive allow the Subaru to handle most off-road driving situations safely.

We noticed a few details during the journeys: The flat bonnet allows a good view ahead. The air pressure can be adjusted to the low load, high load or trailer operation situations.

The base price is 36.900 euros. The consumption in autumnal conditions leveled off in our test between 8 and liters of super. In the case of heavy terrain or when towing a trailer, higher values ​​can of course also be achieved. The classification in the insurance is with the levels 18/25/25 (liability / fully / partially comprehensive) in the upper segment. The guarantee promise is 5 years.

The Subaru Outback is consistently designed for a resilient off-road vehicle. It is primarily tailored to users in hunting and forestry. With a braked trailer load of up to 2000 kg and all-wheel drive, it is also an alternative for users from the construction and craft sectors. The Eyesight system can help avoid collisions in typical dangerous situations while traffic is in motion.

The boxer engine as a unique selling point is likely to remain a trademark in the future. According to Subaru, the new e-Boxer should automatically adjust the power supply between the combustion engine and the electric motor in the XV and Forester to the driving conditions. Three different driving modes can be achieved: purely electric driving, driving with a combustion engine or electrically assisted driving. From a standing start or at low speed, the electric motor alone provides propulsion. Depending on the battery charge and driving behavior, only short distances of up to 1,6 km can be achieved purely electrically at a top speed of approx. 40 km / h. At medium speeds, the electric motor supports the 2,0-liter four-cylinder boxer petrol engine, while at high speeds only the boxer petrol engine provides propulsion and charges the battery.
The new drive variant will probably not appear until the end of 2019. The final technical performance and consumption data will be submitted later. Because the hybrid drive will only go on sale towards the end of the year, the exact performance and consumption data will be announced after the corresponding homologation. The system output will be around 160 hp. With the slight increase in performance, Subaru promises a reduction in fuel consumption of 2.0 percent compared to previous 11-liter boxer gasoline engines.

There are more detailed test results in the current magazine. Subscription under