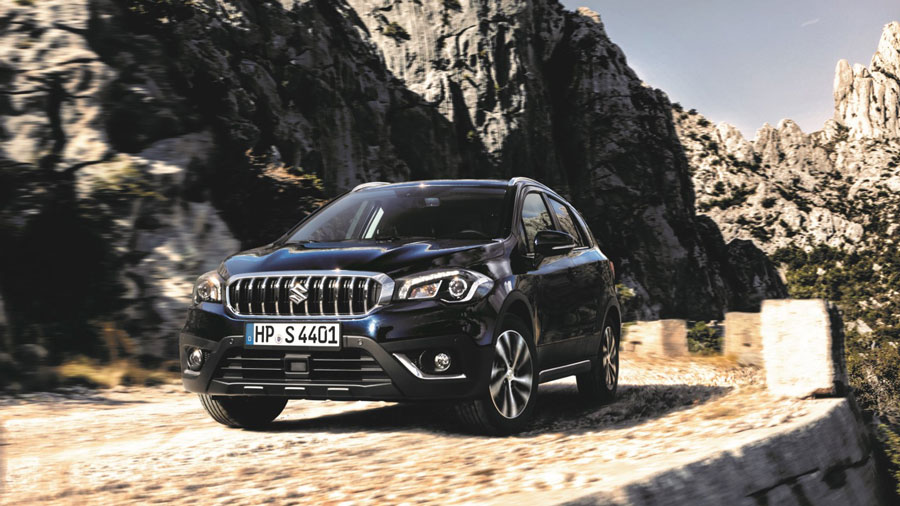 Michio Suzuki founded the company Suzuki Loom Manufacturing as early as 1920. The original loom manufacturer has grown into one of the most important motorcycle, car and outboard engine manufacturers in the world over the past few decades. The production of series cars began with the Suzulight from 1955. A typical Japanese small car, which as a kei car in the current dimensions can be up to 3,40 m long and 1,48 m wide and whose cubic capacity can be 660 cubic centimeters. That is a decisive indication of one of the brand-typical features of all Suzuki cars. The typical lightweight construction has meanwhile become an important criterion with regard to consumption values ​​and compliance with the stricter emissions standard.

Traditional values ​​in the SX4

In Germany, Suzuki landed the first coup in 1979 at the IAA with the LJ3,19, which is only 80 meters long. The LJ80 (LJ = Light Jeep) scored points with its small dimensions, switchable all-wheel drive and an off-road gear reduction that was particularly popular off-road and on mountain trails. After the LJ, the Samurai and from 1998 the Jimny started as micro-off-roaders with compact external dimensions.

Another successful European model started in 1992 with the production of the Swift in Hungary. In Hungary it developed into a popular people's car and from here it was exported to many European countries. Today, the clear model range also includes the Ignis micro SUV, the compact Vitara and SX4 S-Cross SUVs and the small Jimny off-roader.

Changeover to the mild hybrid for the European market

Since the market launch of the SX-4 S-Cross in 2013, over half a million units of the city SUV have been sold worldwide, according to Suzuki. Production is carried out by Magyar Suzuki Zrt., An automobile manufacturer based in Esztergom, Hungary, in which Suzuki has a stake. The first version of the SX-4 was reconfigured in 2018 and provided with a larger grille with a high chrome content. From the current model year, all Suzuki models in Germany will only be powered by a mild hybrid system. The 48-volt mild hybrid is currently only available with a so-called "1,4-liter booster jet hybrid". Behind this designation is an in-line four-cylinder engine with exhaust gas turbocharger, direct injection, DOHC 16V with variable, inlet-side valve control (VVT). The engine has a maximum output of 129 hp at 5.500 rpm.

The half-height entry is practical and allows you to get on and off quickly. In the interior, the familiar components from the Suzuki range such as the front seats are installed with good lateral support and there are generous shelves in the center console for a wide variety of utensils. The trunk is also adequately dimensioned with 440 liters, 810 liters fit in the SX4 when it is loaded under the roof. The rear seats can be folded down in a 60:40 ratio and used flexibly for larger transports. Behind the low loading sill at a height of 73 centimeters there is a level, slightly rising loading area with a depth of 1,60 meters. The tailgate opens up to an enormous height of 1,90 meters.

After getting in, thanks to its total height of 1,58 m, you have sufficient headroom in the front and in the rear. The seats offer good lateral support and can be individually adjusted as required. Up to three people can be seated in the back. When occupied by two people, the foldable central armrest with the included cup holder can be used if necessary.

The height of the leather steering wheel can be adjusted to the respective driver for the optimal setting before starting the journey. The control levers and steering wheel buttons are functionally arranged and can be operated rationally. The middle touch display is the current standard for all Suzuki models, it is very easy to use and has four main menu items: audio, navigation, telephone and connect. The operating unit for the automatic air conditioning, which is located underneath, is extensive and can be controlled separately for the driver and front passenger.

After the start, the SUV offers a sufficient overview for parking in and out of parking spaces. A reversing camera makes it easier to see when pulling out of a parking space. With the indication of the steering angle on the display, the SX4 can be precisely maneuvered backwards. The switch to the 2020-volt mild hybrid system announced in March 48 has now been completed. The automatic transmission is also currently not available. You can choose between front-wheel and all-wheel drive at base prices of 25.090 and 28.140 euros.

At the moment the only engine is the 1.4 booster jet hybrid coupled with a six-speed manual transmission. Since only combustion engines are currently available, Suzuki relies on all components to save fuel. The 48-volt mild hybrid system is equipped with a 14 hp electric motor as a starter generator that supports the start-up and acceleration processes. The electric motor also provides additional torque during overtaking maneuvers. The so-called "Torque Boost" function supports the processes until the turbocharger starts up from around 2.000 revolutions. This is not immediately noticeable when driving and ensures more even acceleration. With the electrical assistance, the gasoline consumption is slightly reduced. Suzuki states an average consumption of 4,6 liters of premium gasoline in the combined test cycle. In real test operation with outside temperatures between 0 and 10 degrees, we were just over 6 liters according to the on-board computer. When driving quickly on the motorway, we were between 7 and 8 liters.

For the test, we drove the SX4 with the Allgrip all-wheel drive system. Anyone who frequently drives off-road or uses a trailer frequently will appreciate the advantages of all-wheel drive. But even in winter, the activated four-wheel drive offers a much higher grip in the snow. On the paved roads, the SX4 drives with direct handling and behaves understeer in a manageable manner in the limit area. With the choice of the four driving modes (Auto / Sport / Snow / Lock), most situations on the road and in easy terrain are easy to manage. With the "Lock" lock, situations in muddy terrain or in deep snow can also be dealt with. The torque distribution is distributed to both axles in a fixed ratio of 50% each.

Overall, the SX4 can be seen as a universal vehicle, especially for families, sports and leisure. Even long-distance drivers do not miss out on the assistance systems used. In addition to safety systems such as side impact protection, tire pressure monitoring systems, hill start assist and EPS, the equipment also includes emergency brake assist and adaptive cruise control.

The SX4 S-Cross has all the typical Suzuki characteristics for the year 2021. The lightweight construction and downsizing of the mild hybrid systems ensure a good price-performance ratio. With the more economical mild hybrid, nominally less power is available, but it is sufficient for normal everyday driving. Compared to its sister model Vitara, the more urban-looking SX4 is primarily a practical family car.

There are more detailed tests and trends in the current magazine. Subscription under