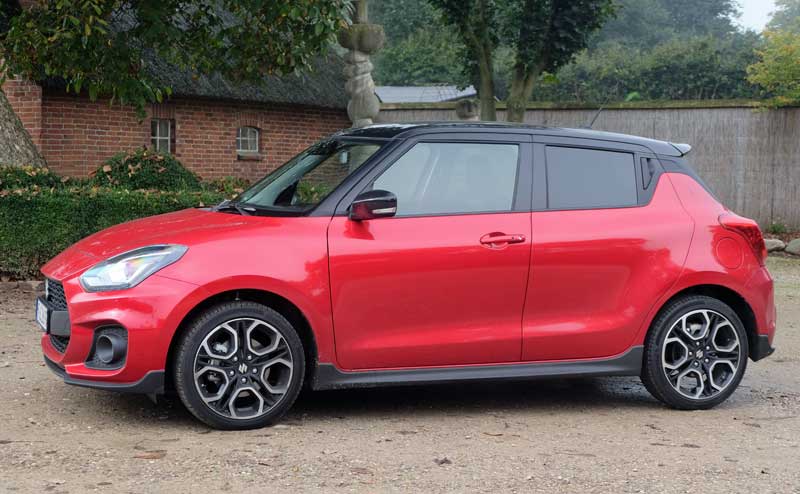 The sixth generation Swift has been on sale in Europe since 2017. With the use of a new platform, on which the Suzuki Baleno is based in a modified form, the weight could be reduced to 1.095 kg for the sports version. The rear door handles of the exclusively five-door vehicle are now located next to the C-pillar, the front grille is more emphasized. Due to the stricter European emission values, the manufacturer is currently relying on the mild hybrid version with a 48-volt system for sports. The Swift we tested is powered by a four-cylinder engine with direct injection as a mild hybrid version. Are the sporting values ​​convincing?

Since 1996 the vehicles for the German market have been made by Magyar Suzuki Zrt. made in Esztergom (Hungary). Hardly any competitor in the small car segment can score with such a low weight as the Suzuki Swift. With the new vehicle platform, the weight has been significantly reduced again, but a significant leap has been dared in terms of dimensions and design. The body looks flatter and wider and therefore a bit sportier. In fact, the Swift is 1 cm shorter, 3 cm flatter and 4 cm wider than its predecessor. The front grille is much larger and the door handles of the rear doors have been moved directly into the C-pillar.
In the interior, the sporty character is underpinned with a few details. Integral sports seats provide very stable lateral support when cornering. The red contrasting seams underline the shape and the backrests are topped with “Sport” lettering. There is enough space for the cramped conditions and a compact 265 liter trunk with loading sill is enough for daily shopping. If you fold down the back seat, you can expand to 947 liters and thus stow bulky utensils.

In view of the steadily rising gasoline prices and the increased price of used cars, economical small cars in the mild hybrid variant will be in demand in the coming months. The discussion about speed limits and CO2 emissions is also prompting global manufacturers to consistently think about exit scenarios from the internal combustion engine. At Suzuki, there are no official plans for this yet. With the consistent lightweight construction and the concentration on the mild hybrid variants, the next few years should be contested on the market. With a weight of around 1,1 tons including the driver, the Swift Sport, equipped with 129 hp and 235 Newton meters of torque, has its own fan base.

The 1,4-liter turbo gasoline engine is lively between 2.000 and 3.500 tours. Although marked as a hybrid in the lettering, the Swift Sport can of course not drive purely electrically. But in the luggage is the generator, which delivers 53 Newton meters of torque, a strong argument for the lower speed ranges. From 2.000 rpm, the turbocharger takes over the power boost.

The battery is mainly charged by recuperation, when coasting and when braking. You can watch the charge on the display. Despite 11 hp less engine power than the previous model, the mild hybrid is almost at the same level of performance thanks to the use of a generator.
The sprint takes a second longer than the previous model. In return, the revised manual transmission with short shift travel and precise engagement of the gears invites you to drive quickly. Otherwise, the stiff chassis and the low center of gravity ensure driving fun on winding roads. A bit of flair from the Suzuki Swift Cup can also be seen in the street models.

The big difference to the predecessor lies in the consumption. Thanks to the technical innovations, we achieve an average of between 2021 and 2022 liters of E6 premium petrol in our test drives in the 7 model year in autumn 10. Those who drive more defensively can also achieve well below 6 liters on average.

Upgrades in equipment and in price

With the facelift, a few details on the Swift Sport have also been changed. The reversing camera was supplemented by parking sensors with acoustic and visual feedback for the drivers. There is now a digital speed display in the analog cockpit. The brake assistant grips courageously and is much more stable. The emergency brake assistant also gives clear signals when it sees an impending collision.
At 23.850 euros, the entry-level price is well above the previous model. On the other hand, significant advances in the motorization and the integrated assistants can also be experienced. The basic model is fully equipped with drowsiness detection, reversing assistant, blind spot warning, lane departure warning system and traffic sign recognition.

With the facelift and the use of the mild hybrid system, Suzuki is focusing on reduced consumption values ​​without letting boredom arise when driving. The sport version is a dynamic and compact companion from the city center to the highway. The high cornering stability is particularly appealing to sport-loving drivers.