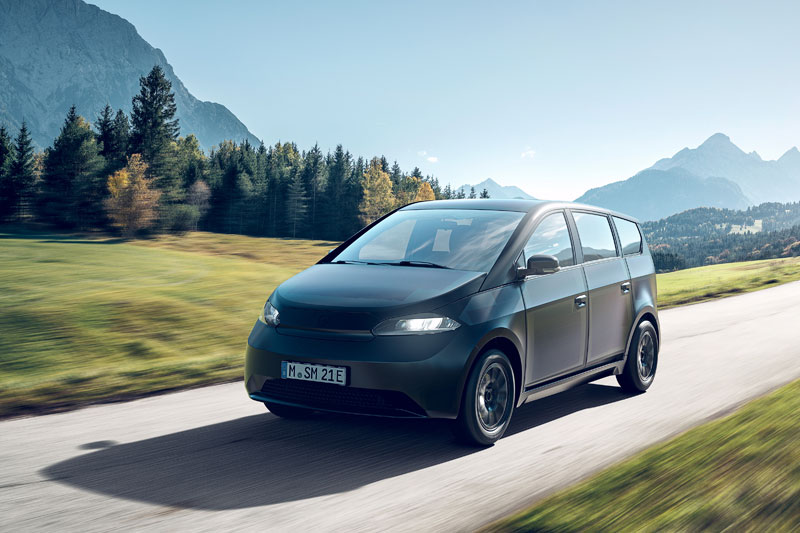 Death or gladioli - Sono Motors on the way to series production

Hardly any other project in electric car development has been reported over so many years as the announced solar car from Sono Motors in Munich. It all started with many promises for a completely newly designed and cost-effective solar electric car. Over the last few years, people have gradually said goodbye to the inexpensive electric car for the city.

The established manufacturers have already jumped into this gap with the Twingo Electric, the e.GO Life or the Dacia Spring including the environmental bonus. And even below these very simple electric cars, there is already an even simpler and city-friendly alternative with the Citroen Ami, which can be leased for the cost of a monthly bus pass. In this respect, the future strategy for the Munich start-up has changed massively in recent years.

The global players in the automotive industry have long since declared the market for emission-free cars to be their own core competency. After all, Munich's self-confidence at Sono Motors has not suffered in recent years. The "Mia-san-mia" well-known by the footballers is continuously underpinned by new press releases and Facebook postings. All actors talk about the new solar car in promising and elaborately produced video spots. This can only be realized with a new dress made of solar panels on the entire car. This is not really new, but is already being integrated by other manufacturers on sensible surfaces such as the car roof (Toyota). Sono Motors is sticking to plans for solar panels covering the entire surface of the car. This costs development time and money, which is then also reflected in the price. For this process, completely new machine tools and manufacturing processes have to be developed to series maturity.

Focusing on the solar car

A look at the ongoing changes is also reflected in the use of new components. While people were initially optimistic about starting with a compact battery and low production costs, the purchase price has now increased to 28.500 euros with all updates. This is already priced at the level of competing models such as the Renault Zoe or Nissan Leaf (without the environmental bonus). According to the manufacturer, you also get a modern battery with a capacity of 54 kWh and solar integration with the promise of being able to charge the battery while it is standing in the sun. But that will not happen in the urban canyons, nor in the multi-storey car parks, carports or garages. The reduction to one color and one equipment variant excludes from the outset many groups of buyers who prefer greater individualization when buying a new car.
If you look at the updated status of the SVC3 component release on the Sono Motors website (03/2022), suppliers for the chassis, exterior or interior have not even been defined for many components. The definitive start of series production in 2023 has not yet been communicated by Sono Motors due to the uncertain supplier situation. The Munich start-up is working hard on series production of the 4,50 meter long Sion with solar panels. The 120 kW (163 hp) electric motor comes from Continental, and the battery pack has a competitive capacity of 54 kWh. According to the manufacturer, the range with a fully charged battery is up to 305 kilometers, which can be further increased by charging with solar energy: the 250 solar cells should enable up to 35 kilometers a day under optimal conditions. On average, there should be an additional 16 kilometers. The charging at the fast charging station should take about 30 minutes to 80 percent of the battery level. With the bidirectional charger, the Sion can be used flexibly for electrical devices or vehicles.

Death or gladioli - the original of the saying comes from a four-day folk hike that takes place annually in the third week of July in Nijmegen. At the finish, the successful participants are presented with gladioli (sword flowers). The quote became known in Germany through the former Bayern coach van Gaal. The coming months will probably be decisive for the "Sion" project by Sono Motors from Munich. According to the manufacturer, there are already 15.000 pre-orders. So far, an environmental bonus cannot be granted when buying a new car.

With the development of the solar car, some formative unique selling points have emerged in recent years. Whether the not very flexible concept with a solar surface, a single color and one equipment variant will be as euphorically received on the market as announced in the video spots will probably only become apparent next year. The competition can score with a higher level of customization.

What chances do you give the new Sion from Sono Motors?