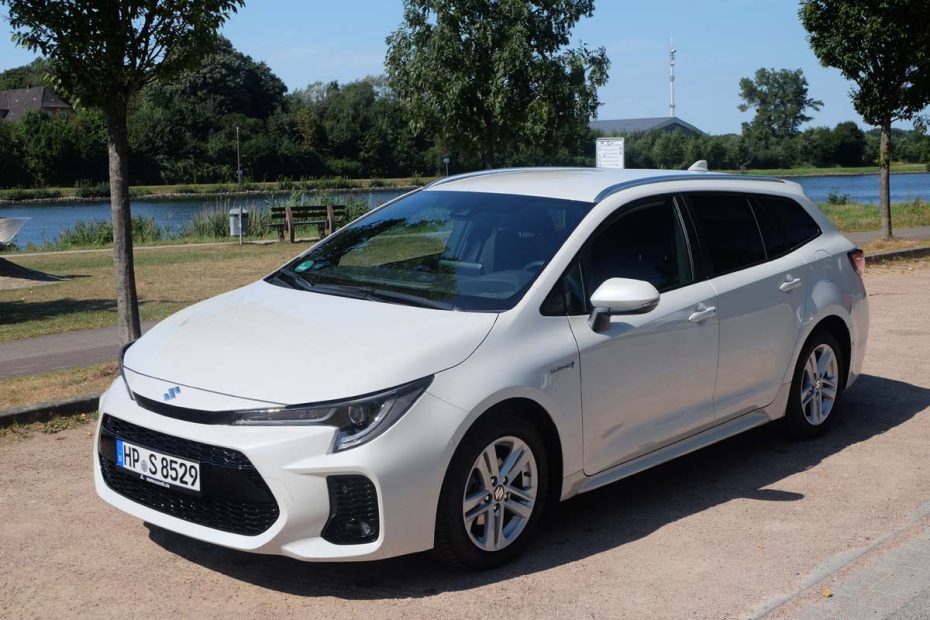 In the coming years, Suzuki will adapt to the stricter requirements on the European market in the area of ​​emission standards. While initially there was a share swap between the two Japanese brands Toyota and Suzuki, there is now also cooperation in the operational business. The two Suzuki models Across and Swace are available with plenty of hybrid technology from the established Toyota group. This is intended to reduce CO2 emissions and curb the consumption of cars. We are testing the station wagon Swace, which is currently being delivered as a full hybrid.

The optical differences to the sister model Toyota Corolla Touring Sports are quickly identified. The front is characterized by a striking bumper, its own LED headlight modules and the idiosyncratic Suzuki grille. There are no big differences in the interior either, except for the Suzuki emblem on the steering wheel. The motorization of the Swape is limited to a 1,8 l petrol variant. With a system output of 90 kW/122 hp, it is sufficiently motorized for normal short and long-distance tours.

The station wagon for cruising

As a full hybrid with a stepless ECVT transmission it is equipped with three driving programs. In ECO mode, you can cruise in a relaxed manner and use a pleasingly low amount of fuel. Often you will find a 4 before the decimal point on the display for average fuel consumption. On the other hand, during short-term performance demands, such as when overtaking with the continuously variable transmission, a loud petrol engine can initially be heard due to the increase in speed. The car is only accelerated with a time delay.

The petrol engine with 98 hp and the 72 hp electric motor only drive the front axle. The low battery capacity limits the pure use of the electric motor over short distances for parking and leaving or in the city up to 50 km/h. The battery is fed by recuperation or charging via the combustion engine. The touring station wagon accelerates from 11 to 0 km/h in around 100 seconds, which is enough for all trips. The top speed is capped at 180 km/h, which also corresponds to the zeitgeist of deceleration. On most motorway routes, the speed is already limited to 130 km/h anyway.

While the SUV market has grown steadily in recent years, station wagon sales have stagnated. With a loading volume of 596 liters and an adjustable loading floor, the Swace offers great flexibility when loading and unloading. To transport dirty or damp objects, you can simply turn onto the plastic side of the loading floor and the carpet side is protected.

As with the Toyota, the lavish standard equipment is complete with LED headlights with high-beam assistant, heated steering wheel, two-zone automatic climate control, heated front seats and ambient lighting for the interior. There is also a multimedia audio system with an 8-inch screen, DAB radio, Bluetooth and steering wheel controls. A connection is provided for the smartphone via Apple CarPlay or Android. Wireless charging is available in the center console below the air conditioning controls with a charging cradle based on the QI standard.

Suzuki sales figures in Europe for all models

Significantly more safety is also achieved with the Pre-Collision System (PCS). The early detection of vehicles and pedestrians in front of and behind the car warn the driver in good time on the display and through noises. In addition, autonomous braking is prepared and carried out if the driver does not react. In our test, this worked very well when reversing out of a parking space. Here, the protagonists driving or walking across are specifically detected and autonomously braked in good time.

The lane departure warning system with direct steering intervention warns the driver as soon as the lane is changed without using the indicator. A noticeable impulse on the steering wheel also brings the Swap back to its original track. However, the system can be switched off if necessary.

The Swace offers a large loading volume and sophisticated assistance systems at a good price-performance ratio compared to other station wagons. It is suitable as a family station wagon and for leisure activities where many items have to be transported. The consumption values ​​are comparatively low and can also be achieved in the practical test in summer under 5 liters of petrol E 10 with a moderate driving style.